The Solitary Life of a Commercial Fly Designer 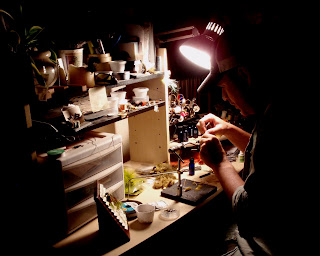 There was a time (I am told) when a guy in his early 20’s could help put himself through college by tying flies for his local shops. Those days are long gone. The mind boggles trying to calculate the number of flies it would take to pay the average tuition these days. The flies you buy at the fly shop today are almost exclusively tied overseas. Thailand mainly. But your fly purchase may still be putting food on the table of someone in your own home town. These local tiers may not have put the finishing knot on the actual dry fly you just lost in a tree, but the idea for that particular fly may have been conceived in the mind of that surly guy with the dirty ball cap who hangs out at the back of the fly shop. Maybe. Or not. Point is…the commercial tying scene has changed in the past couple decades. Remove the image of the young English major crouched over his hand-me-down Thompson vise and a pile of 40 dozen zebra midges up in a dorm room. Nope. Remove that mental image. (Oh, that kid is still up in his dorm room...but crouched over a bong instead. Bloop…bloop…blooping away his parent’s trust fund.) Now the flies are tied in other countries. But the ideas are still home grown. Nowadays the fly industry more resembles the book publishing industry. A tier spends years developing and tweaking a particular fly for his favorite river. A fly that is different from what already exist. Better...in some way. Then he sends samples of this fly off to “publishers” and hopes they buy the pattern. If they do—and they rarely do—he can then expect an 8 to 10 percent royalty check every three months for as long as the fly is in circulation. Sounds cool, right? But, although fly fishing may be considered a rich man’s sport, it remains a poor man’s industry. God, that’s depressing. So, let’s look at this fly thing realistically. You pay what for an average trout fly? $2.00, right? Now, the fly shop only paid about $1.14 for that fly…8% of that is what? 9 cents. Yup. Livin’ the high life. But some of us are still chasing down the dream. The dream of making a living doing what we love. Working at a fly shop all week, not so much for the meager pay, but to be surrounded by everything new coming out in the tying world. New hooks…new materials. And sharing and gaining ideas from others of the same ilk. Listening to the complaining, too. Paying attention to the grumblings of fisherman. W 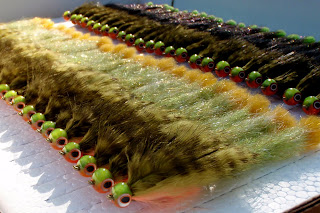 hat sort of flies do they like? What catches their eye in the fly bins? And the countless days spent out on the water testing new patterns. This part of the job is the aspect that friends and family incorrectly identify as the “off” time. “Oh, he gets to fish a lot. That must be nice.” Nope. Still at work. And then the nights. The long nights. Every night. Slaving away at the vise…chasin’ down the dragon…


Read another story: The Male Ego
Posted by Jay Zimmerman at 9:42 AM