Carp are on the move...again 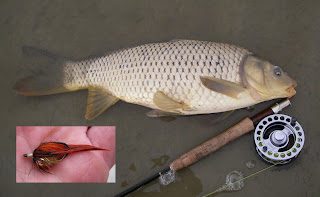 This Spring has been a weird one for us warm water anglers. Some guys have been finding some cool water largemouth locally and after we have had a string of sunny days in a row the carp action has been alright. But the warm weather is here for good I think...and the carp and bass fishing is going to get awesome. Well, it just did!

Posted by Jay Zimmerman at 9:13 PM No comments:

Step 3  Build a fat butt of the abdomen with the Lt. Cahill thread, then tie off and trim.

Step 4 Switch to olive Lagartun or UTC thread and continue building up the tapered abdomen, leaving a small amount of the light yellow butt exposed.

Step 5 Wrap the duel wires forward and tie off behind the black bead and trim both thread and wire. 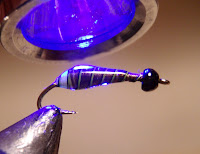 Step 6 Coat entire abdomen with a liberal amount of Loon UV Knot Sense and set using UV light. This will immediately set up hard, but may have a slightly matt finish, so coat with thin layer of Hard-as-Hull head cement.

Step 7 Tie on legs using 3 or 4 fibers of Gadwall flank feather on either side. 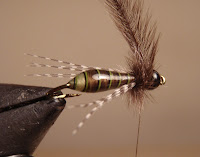 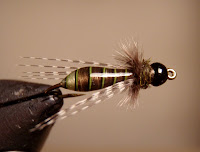 Step 10 Wrap dubbing rope up to the black bead and whip finish. Apply small amount of head cement over knot.

Posted by Jay Zimmerman at 7:54 PM No comments: 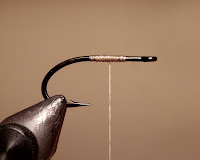 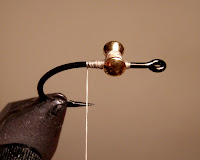 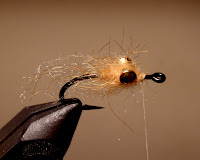 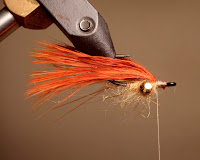 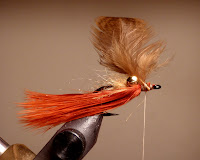 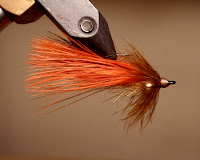 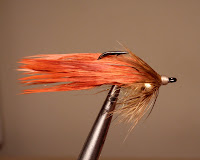 Read Story: We Are What We Fish For
Posted by Jay Zimmerman at 3:41 PM No comments: 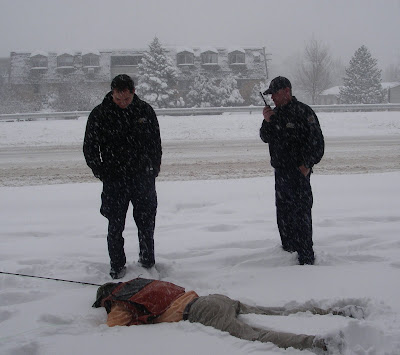 Yes...it got cold and snowed. After all this is still March in Colorado. I know you all were enjoying the unseasonably warm weather...but no griping, complaining or tantrums! We badly needed some sort of moisture in the ground. Rain, slush...or snow...whatever. Remember the drought years? Besides, adult fishermen throwing tantrums only causes a scene. Then law enforcement or other hard working community servants get called out...just a big mess.
Posted by Jay Zimmerman at 9:27 PM No comments:

PUT ON YOUR BOOTS

Wisdom is whatcha get from a lifetime a doin dumb shit
Memory paraphrasin a poster a my past—get the gist butcha gotta touch the flame
Motha said it was hot—gonna burn my finger
But I gotta know about the fire and getting advise and takin it ain’t the same
Just strivin’ to be a wise one not a ‘bedient bitch
Vietnam vet say don’t raise your hand—don’t go to the front
But if ya do—lay low, aim low and keep that fucker on full auto
So I take point—put on every ‘chute I’m given
Survived kicked outtabit smatta than I was befo
Loyalty brotha hood—balls like a crate a live hand grenades
Swingin watches from the hands a the rich
Easier said than done—sucked in by the fun
Bitches fuck ya then frag ya with shrapnel size of a ring
Brain me and beat me messy like a back-alley hysterectomy

Whatch get for doin dumb shit…

No need to comment—I can smell your sweat and your fear
I know your bitch ass is here
Up on my back—showin off lunkers larger than mine. Always gratin
Nothin but baby stones with the anonymous hatin
Bad enough I got ex’s trippin in waders cause she lookin ‘round and the best guide’s missin
But like Bobby says, It ain’t me Babe
I’m up Coal Creek—yeah, I got it made
So just don’t do it.
Don’t be confused by the tone of my voice it ain’t me just my soft-hearted muse
I got it today I get it all the time
Hip-huggin hippies love me ‘cause I can rhyme
And the rednecks and bigots I meet on the river think I’m down with the cause
‘cause they been hearin the street—Byrd’s packin heat

So just don’t do it…


Gotta better chance a takin Tyson in the 90’s
Like they say in the Hill Top sect
I’m Boba Fett with an intellect
Another ring from the Hamma—you can’t touch this shit
My words will hit ya like a flyin knee
Straight to the face like LIVE FROM THE UFC!
And they won’t bruise your brain like a fall from your bicycle, bra…
They’ll leave ya drinkin a lifetime a burgers from a motha fuckin straw


Throwin knees in the UFC…

I ain’t another limp-wristed bag a tea
God-fearin white kid from the 303
Raised like a little boy version a JonBenét
My blood’s rich from the Father Land, mixed with crooks from the land of the Oz
And I’ll drop my pack, pen and my rod
Put a felt boot to your neck—curb ya like American History X 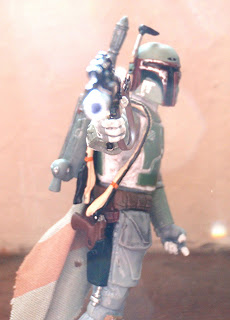 Posted by Jay Zimmerman at 6:37 PM No comments: