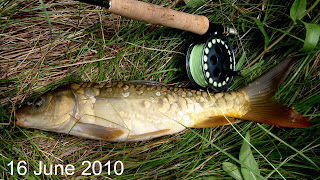 Every now and then we are convinced we recognize a particular fish. We are sure we have caught the same fish previously. It is just so hard to be sure. Sometimes it is some distinctive spots on a trout, or some scarring or disfigurement. I have caught the same 13 inch brown trout with a crooked spine out of the same pool on Boulder Creek several times. And the same, hare-lipped largemouth bass from the same cove of the same pond twice this year. Now I have mug shots of what I believe is the same carp…caught four months apart. This in itself is not really a big deal. What I do find fascinating is how this individual fish has grown and changed. The odd scale configuration on this fish is the sole identifying characteristic…this is a semi-rare genetic mutation that you will see in common carp. The results are known as “mirror carp”. You will notice the stark difference in the scale configuration between the June photo and the October photo. They may appear to be two different fish, but keep in mind the pond th 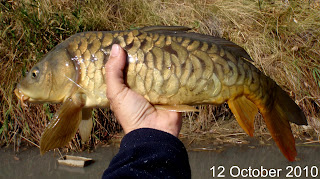 at this came from is very tiny. There may be only 80 to a 100 carp, at best. And I have caught most of them at some point or another during the course of the year. I am fairly certain this is the same fish. It has gained the appropriate amount of weight…but the real cool part is how the scales have developed.
Posted by Jay Zimmerman at 8:12 AM