The biggest inconvenience in having a friend who is a teenager is not what you might think. It is high school. Yup, same as what the biggest inconvenience was when I was a teenager. I keep trying to get him to drop out, but he won’t. The fishing is so much better on the weekdays, I tell him. No other fishermen around. But he won’t drop out…even after I promised him a job at the fly shop. Maybe I am a poor role model…? 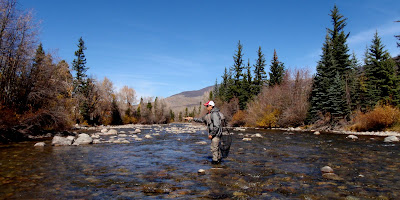 But, Cody had a day off of school during the week. And I agreed to go wherever he wanted. Apparently he had some unsettled business with the large rainbow trout in the Blue River. Off to Silverthorne we go. It is a bright, bluebird day. Not a cloud in sight. So we are not expecting great fishing, but we try for arguably the most harassed and highly educated trout in the river. The ones in the stretch of river in town, directly behind the Cutthroat Anglers fly shop. I saw some big BWO’s hatching, but we took our best rainbow trout on streamers and weighted caddis pupa. I would stand on the walk bridges and spot fish…and Cody would cast to them and catch them down below. Was fun to watch.
Posted by Jay Zimmerman at 8:57 AM