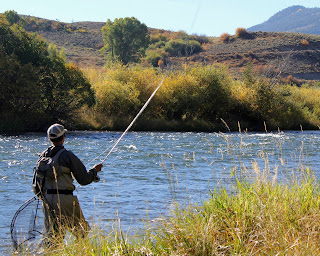 The Americas Cup international fly fishing tournament was held in Frisco this September. It was a three day event, with competitors fishing stretches of the Blue, Arkansas and Colorado Rivers. There were 65 fishermen from at least five different countries...USA, Australia, Japan, Poland and Ireland. Devin Olsen from Utah took first place and Lance Egan took second. Our own Cody Burgdorff of Lafayette, Colorado took 23rd, but took the largest trout of the competition; a 22 inch rainbow from the Blue River. Ironically, he was using a "Frenchie" nymph (a fly desigened by Lance Egan and sold through Umpqua Feather Merchants).
Posted by Jay Zimmerman at 7:53 AM