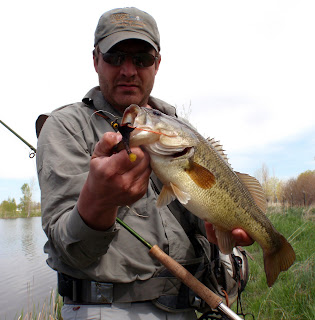 We finally got more than three days in a row of nice, sunny weather. This is what we have been waiting for…whatever it takes to get the local lakes up into the mid 50’s. I took water temps at some of my favorite carp and bass lakes yesterday and most were hovering nicely around 55-56 degrees. These are the water temps I usually am waiting for in the early season. They signify the onset of potentially good warm water fishing.


During my day off I was able to find some semi-active carp, but most were hesitant to move far for a fly. I did, however, find some good largemouth bass moving into shallow water (pre-spawn) staking out their territory. There are a bunch of small bluegill and perch active as well, so it is putting these bass in a fairly aggressive mood. I threw baitfish patterned such as the Bellyache Minnow and some larger bass flies like the Geezus Lizard (pictured in mouth of bass) with good luck.

Posted by Jay Zimmerman at 5:49 PM No comments: 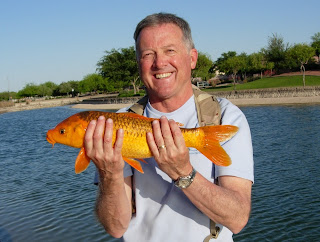 Craig Hoffman was visiting his daughter Julia and her husband Nate at their home in a western suburb of Phoenix. There is a system of aquifer recharge ponds configured to provide quasi-lakefront neighborhoods. The ponds are stocked with common and grass carp, japanese koi, white amur, catfish, and tilapia to keep the water clean and mosquito-free. Fishing is allowed, but is catch and release with barbless hooks only.

The water level had not yet been raised to summer levels, so the fish were very spooky. Craig did not bring a rod or reel - he used his son-in-law's old whippy Browning 5-wt with an old Martin stamped reel (no drag...). He caught a few koi and common carp (on #6 Backstabber carp flies) but was unable to catch a white amur. He stalked a few amur in the 30-40lb class. Probably a good thing he didn't hook one, considering his equipment! As it was, the 4-6lb fish were a real battle. He had to provide drag with his fingers, and was forced to walk the fish along the adjacent bike path until they tired enough to be handled and released. He hopes to return to Arizona this fall or next spring for more warmwater action!

Thanks for the story, Craig! Hope you don't mind the change of POV!
Posted by Jay Zimmerman at 5:07 PM No comments: 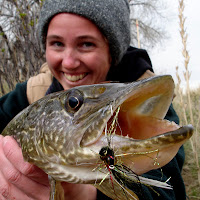 Fly Fishing for Pike in Colorado (a crash course) Click Here! Northern Pike are an exciting quarry. Many spin fishermen and bait casters are aware of how fun pike can be, but fly fishers are mostly oblivious. Less than 15% of fly fishermen in Colorado have ever cast to pike or musky. I believe the main reason for this apparent lack of interest is intimidation... 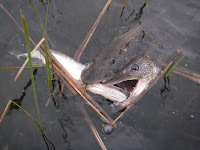 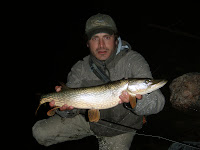 Northern pike...get out of bed early! Click Here! As the spring wears on the local pike fishing will remain good...but it becomes more and more important that you get up early. The best fishing will almost always be in the first couple hours of daylight. The pike will be in very close to shore, in shallow water in coves and along thick walls of cattails.

Flies for Cannibals Click Here! Once the water begins to warm up on your favorite pike lake the aggressive tendencies of northern pike will become intense! Pike feed on a lot of different things, but most of us fly fishermen use large streamer flies to emulate the resident forage fish. Often this is bluegill, suckers, young bass and perch...
Posted by Jay Zimmerman at 10:56 PM No comments: