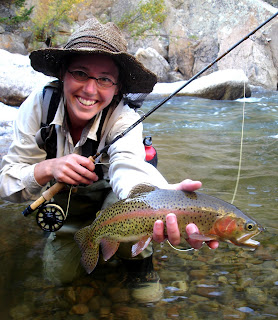 “Well…let me know how it turns out.” Tom said.
I had run into a friend of mine at Alfalfa’s grocery store. “So, whatcha got planned?” He asked. Now, I don’t know if my walking around facial expression reads: I Am Up To Something. But my friend Tom knew… He spotted me on the prowl for portabella mushrooms and approached with the same caution many guys I know as patrons of the fly shop do…as though I were some sort of semi-dangerous escapee—having gnawed off a foot, bent the bars and now loose in public.
So, I gave him the run down. (Insert a mental snapshot of a Wild-Eyed Expression!) I had this plan to explore a stretch of canyon trout stream I thought few had ever seen. Sure, it was a well-known stream that is also known to hold only smallish trout…those from 8 to 10 inches as an average, but I knew there were only two popular access points and they were a days hike apart…but with some very hairy and quite possibly impassable narrows between them. I told him about how we were going to do a vehicle drop in this little town up in the mountains, then drive my truck back down to this big reservoir that I know the stream empties into. We would hike all the way back to the inlet (this alone may take some time and navigating…it is a large reservoir way up in the mountains) and then commence fishing upstream until we run into a set of old railroad tracks…then hoof it into the little town where we had the other car parked. Simple. And my hunch was that somewhere in the middle we would run into the Glory Stretch…the part of the stream that is rarely ever seen, let alone fished—somewhere downstream of the one known “pinch point” of the canyon that had, in past years, kept me from wandering farther down from the upper access…and upstream farther than the practical “turn-around” point for those moving up from the reservoir inlet and hoping to be back to the car before dark. In this No Man’s Land must reside some good trout. One would think. 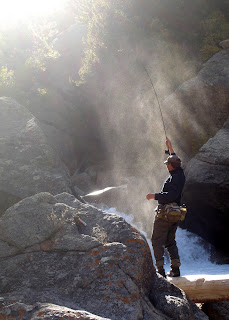 So, Tom wanted to know how it all turned out. “Well…if you ever see me again, it turned out fine,” I said. And I guess that about sums it up. I am still here. So is Erin, my fishing partner. We survived. But there was a good hour or two that I honestly thought we may not. But I dug deep and did my best to stay convincingly positive about the overall outlook of survival…for ’s sake. There ended up being an entire series of pinch points in the middle of the canyon. Most were passable only with just the right combination of rock climbing (at one point I actually had to wedge my wrist into a miniature crevasse in order to pull myself up!) swift-water wading and calloused nerves. There were at least two Cliffhanger moments featuring me doing my best Sly Stallone impression. You’re not gonna die! Later, would mention—with a slight waver in her voice—that if her mother witnessed what we had just done she would not like me so much anymore.

Oh…about the Glory Stretch? The rarely seen No Man’s Land? Yup…
Posted by Jay Zimmerman at 7:27 AM