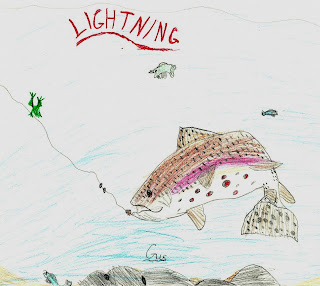 Written and contributed by Gus Tillinghast

Once there was a fish named Lightning. He was swimming with his friends when he passed a fly. " Oh yeah. Lunch time!" Then he bit it. Then it pulled him close to shore. " Oh darn! Fishermen!" But he was stronger. He pulled the other way. The fisherman fell into the water. Then Lightning slapped him in the face with his tail. Then he swam back to his friends. The next day he got ready for the Fish Olympics. It was the best thing of the year. Everyone went. Even the lazy dogfish went. Then it was time. The first activity was who could swim and jump the fastest and farthest. Lightning won first place for this event. The next one was the cutest baby contest. Lightning's mom and baby River were in this. They won too. The next was how many fishermen you could pull in. It was a tie between Lightning and Finn. The rest Lightning wasn't in. The next day he was messing with fishermen. The sixth time a guy was really strong. Then he got him! He was put into a huge cooler filled with water and other fish and his friends. Then he was taken to an aquarium. He was put into a tank with his friends and family. An hour later the aquarium opened. Then people put their ugly faces up to the glass. That night Lightning showed a trick to his family to swim and jump. Then he told them to jump from tank to tank until they got to the cooler at the exit. But first he made a baby carrier out of seaweed for River. Then they did it! The next morning they were taken back to their pond. They jumped out and swam back to their rock house.

Read More Stories From Gus!
Posted by Jay Zimmerman at 6:34 AM