How (And Why) to Tie a Furled Dubbing Loop

Furling fly tying materials is not necessarily a new or innovative technique . I have even seen fly tying books devoted entirely to the practice. I have even seen tiers making small leeches using twisted dubbing loops. But, the concept of creating a true worm using an extra long furled dubbing loop has never been fully explored. Until now! The biggest trick when doing one of these long worms is to have enough confidence in your tier's dexterity to set aside any dubbing spinners or other useless gadgets you were talked into buying. Most of us were born with ten of the best fly tying tools ever...sticking straight out of the ends of our arms. Yes, fingers. Learn to use them. 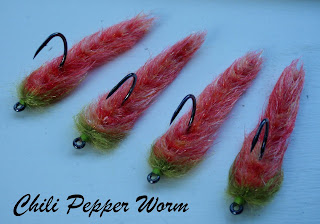 Use any strong thread. I prefer two strands of Danville's 3/0 waxed monocord. I double up the thread because I feel having two strands aids in the loop's ability to grip the dubbing material more than a single strand of thread twice as thick. Apply a liberal amount of dubbing wax onto the entire thread loop. The stickiness of the wax makes loading up a ton of dubbing into the loop much easier. Also, the wax greatly helps with retaining the dubbing in the worm once it is finished--reducing "shedding". Run the double-strand thread loop over just one finger (Preferably the index finger) of you non-dominate hand. Use the middle finger of that same hand to "close the gap" of the loop...this will hold the clumps of dubbing in place while you are stacking.

Once the entire loop is stacked with dubbing (long-fibered, natural dubbing is always best!) lick your fingers and begin twisting. Put as much twist in the thread as you possibly can without breaking the thread at the hook shank. If your dubbing loop is stacked thick, you may have to rake out some of the loose or wild dubbing every so often as you are twisting. You need as much twist as you can possibly get, because this is what allows it all to furl back over itself. If you have added a bit of yarn into 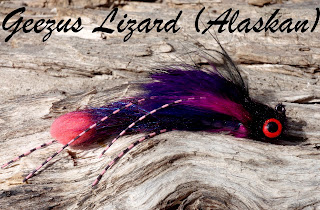 the middle of the loop (to act as the "tip" of the worm once finished) then grab that and pull it back as though it were a bow string. Once the two sides are laying next to each other, give it a slight twist to encourage the furling to begin. You will have to help it along, but that is alright...it gives you the opportunity and control to give the worm an even color segmentation. If you are tying a fly such as a Cinder or Palolo, that do not have the need for a special "tip" then use the crook of your whip-finish tool to hook the twisted dubbing loop at the half-way point and pull it to the side.
Posted by Jay Zimmerman at 7:33 AM