The day was set. We both had the plan. awoke early, ground coffee and began packing ice and snacks in the soft cooler. I rounded up some 6 weights and appropriate fly boxes. Today would be a carp day. Gonna hit the mudflats in the red canoe again. Some new flats this time…some that we had not been on yet this year. This reservoir is one we save for September—the Fall Flats, always a treat at the end of the season. 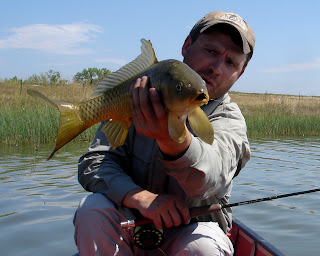 And we got there early enough to be the only ones on the water, yet not too early…the sun had plenty of time to start warming up the shallow flats and back bays. The critters had begun stirring and there were carp sleuthing about looking for food. Here we come…gliding silently into position, aiming and delivering a fly with smart bomb accuracy. Like an A-10 hunting tanks. OK…maybe we were just trying to be that good. Usually we were getting too close and spooking the carp, or banging the paddle on the side of the canoe (thus sending every fish within 40-yards scurrying for deep water) or simply dumping god-awful, sloppy casts in heaps on top of the unsuspecting carp…scaring the crap out of them. But, every now and again we would manage to do everything right. It always looks so dang good when everything works out. Fish…at ! Bam. Perfect cast. Strip. Strip. Right there! He’s on it! POW!
But that is carp fishing. Things are stacked against success. And when things are finally beginning to happen…the fish are active and the casts are improving…then the weather changes. Sometimes it isn’t something drastic, like a storm moving in, but something subtle. The wind picks up slightly, or more clouds block the sun…some small things to hinder your ability to see fish. Again, the nature of this type of fly fishing is stacked against success.
I looked at the sky and could tell the light was only going to get weirder. The wind was getting worse, the clouds thicker (and darker) and we were spooking fish long before we had a chance to spot them. I new our carp day was going to be prematurely over. So? What to do? 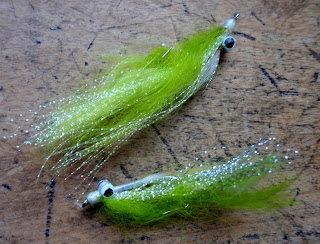 “Hey, . Got any of those chartreuse Clouser Minnows you tied?”
She did. And we trolled around for two hours…me paddling and Erin holding two six-weights like Yosemite Sam. And we chased a young school of wiper around the lake—giggling with every hook-up. Yup…always carry some Clousers with ya! Never know when they will salvage the day! 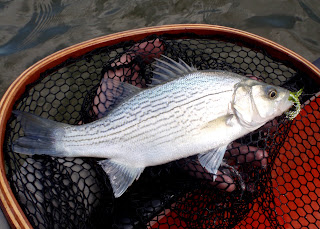 Posted by Jay Zimmerman at 6:18 AM