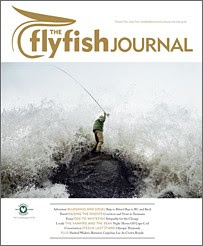 Alright…I have said it before, but tentatively. If you have not heard of The flyfish Journal yet, you will soon. I made this statement tentatively a few months ago because I had just received the first issue. And was blown away. But, by singing such high praise after only seeing the first issue kinda felt like I was predicting Oscar after only the first ten minutes of a newly released movie. Not tentative any more, though. Got the second issue yesterday. For starters…best cover shot I have ever seen on any fly fishing magazine. Ever. No… most awesome shot ever even in a magazine! The angler is Derek Bonn and the photographer is Andy Anderson. Have no clue who these guys are, but I declare them both the fly fishing bad asses of the year. So, that’s just the cover…let me give my honest assessment of this thing. And I’ll keep it simple and direct. This publication is set up in what we avid readers of sporting literature recognize as a true published “journal” format. Very much like we see in Grey’s Sporting Journal. So, yes…if you still have not learned how to read, feel free to pass. And the writing is good. I don’t like token, rehashed how-to articles. I want good writing. This has it. Now photography. Friggin’ awesome. I was already smitten by the cover shot, but I want good human interest stuff mixed up in my prose, thank you very much. Like juicy hunks of hot dog in my beans. This one has it. At the fly shop yesterday morning we all sat around the back table and dug into our individual copies and it takes WAY more than a bunch of sloppy grip & grins to get ooohs and aaahs from a bunch of salty fly fishing cynics. But we all made plenty of the appropriate noises. So, well done, guys! Looks like The Drake finally has a companion on the back of my crapper.


Check out flyfish journal and subscribe!
Posted by Jay Zimmerman at 8:57 AM