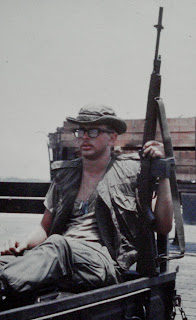 Wisdom is the only constructive result of a lifetime of dumb decisions. Or something like that. My memory is paraphrasing some motivational poster I once saw. But I get the gist. Yeah…I get the gist. I have learned some hard lessons in life the long way. I had to figure them out for myself. Had to touch the flame. Mother said it was hot and it would burn my finger. And it did. Every time. But listening to advise and taking it are not the same. Even as a toddler I guess I was striving to be a wise man, not an obedient one. Besides, now I knew about fire. Then, as an eighteen-year-old Army recruit, my father—a Vietnam War vet—advised I not volunteer for anything. Lay low, aim low (M14s had wicked recoil on full auto, I guess) and stay alive. So, naturally, I took point at every opportunity, donned every parachute offered me and willingly let Uncle Sam try to kill me very quickly and creatively. But I survived and got discharged a bit smarter then when I went in. Not that much smarter, but I did leave knowing something about loyalty and brotherhood…and the dangers of mixing high doses of testosterone with a crate of hand grenades. Then I got involved with a women—possibly the one thing more dangerous than an anti-personal mine. She convinced me to marry her and did her best to emotionally neuter me. It got messy. Like a back alley hysterectomy. But, 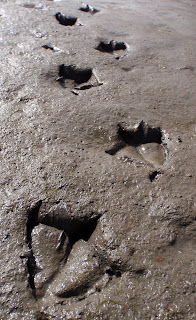 I escaped again. Banged up and baggage riddled…but free and wiser. I knew some key things, now, beyond any doubt. I knew that fire was hot, friendly fire was not, that patriotism was just a fancy word for faith (and both were just swinging pocket watches held by those much larger and richer than me) and I knew that when dealing with women, at the first sign of a trap RUN FOR THE HILLS!

Easier said the done. Run for the hills. A new girl pays attention to you, pretends to like the same things you do. Sweet…she even wants to fly fish! So you ignore the red flags. Oh, of course they start out small. Minor little things—ice fishing tip-ups popping up way out in the lake ice. You look away, then refocus. And there they are…little red flags waving around for every soul to see. But easy to look away from. You ignore her family. You ignore her politics. Then one rainy day you open the door of your pickup for her and scurry around to the driver’s side and she, as usual, doesn’t lean over to pop the lock. You stand there in the wet parking lot fumbling with your keys and it hits you. Pow! She ain’t for re 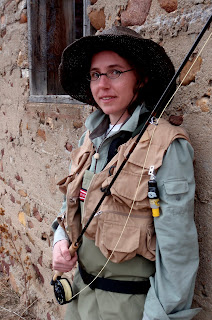 al. She doesn’t want you…she just wants you around. A rusty old Victor leg hold in the form of female validation. Run for the hills, dude! RUN!

So, it was the situation I found myself in once again. I meet a beautiful young woman who falls for me seemingly as hard as I am falling for her. She is amazing and vivacious and tells stories better than I do. And I am a fisherman! She is single and lives up in the mountains. She has a dog who, like the dog of my father’s youth, is named Banjo. And she plays one, too. And her fleece smells faintly of wood smoke. And there is a red canoe upside down behind her shed. And I stood dumbstruck beside my pickup when she leaned over to the driver’s side and swung my door open for the first time. Dumbstruck…and in love. But, I am not naïve. Not anymore. I know that when things seem too good to be true, they probable are. I know that just because it is quiet does not mean it is safe. Maybe too quiet? (Yes, soldier…you’re a step-and-a-half into the kill zone!) So, the intense winter romance had to be tested. Held and trialed by fire. We had to go fishing together.
“Where are you taking her?” friends asked. “Down to Boulder Creek?” A likely and easy place to begin. But certainly not a true test. “Goin’ carpin’,” I said. Goin’ carpin’. 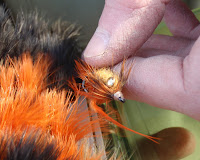 My friends shook their heads and muttered foul phrases of disapproval. The weekend was going to be full of sunny days, but much too windy. And way too early in the season for carp. And carp on the fly? For the first foray into fishing together? Ha! Trial by fire, baby…trial by fire. Best I expose this woman to my uglier side as soon as possible. Remove the scenic, rugged-romantic image of a fly fishing guide. Lead her into the knee-deep rancid slop and put her grill-to-grill with the barbuled face of my other true love. See if she was for real. So, there we stood…together beside the water. I held out a box of my best carp flies and had her select the one she wanted. And tie it on. Then pointed to the shallow mud flats. The discolored water. The dorsal fins briefly breaking the water’s surface. Those are feeding fish! Do your worst to them, woman! Do your worst! 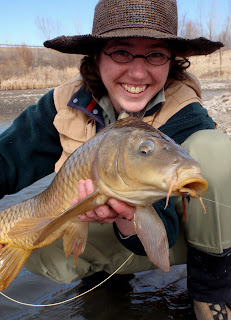 View a slide show and see how this First Weekend turned out!
Posted by Jay Zimmerman at 8:15 PM