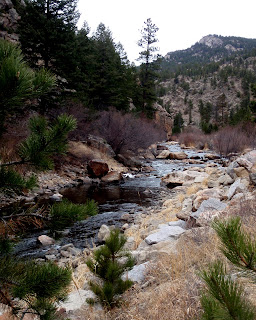 I woke up the other morning with a crazy notion. I had a weekday off and the fishing had been good and the reports filtering though the fly shop were getting more and more upbeat. People were getting out and getting fish. Spring was here. I had eaten dinner the night before on an old wooden dining table with a glass vase brimming with bright yellow daffodils. A beautiful woman served me the first asparagus of the year and I was told that the old wooden table was her parent’s first. And she admitted the flowers were poached from a university garden. Shhhhhhh….! So, my dreams were of spring things, inundated with bright colors, romance and greenery and high lakes and cutthroat trout… And I awoke with the idea set in my mind to fish Lily Lake! Baaaa! Too early yet, you may have said…warning me that my imagination had gotten the best of me. But my exuberance would have convinced you. I hear Manchester and Estes are both ice free! Lily is BOUND to be clear! We would be the first of the year to fish it, I told my new fishing partner. She s 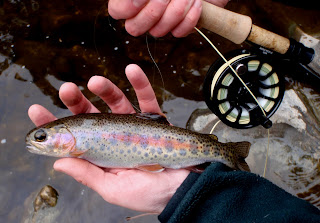 miled. Sure I knew what I was talking about.

But, I did not. Got way ahead of myself. After the drive through Boulder, to Lyons and up RT 7 only to find Lily Lake under a thick layer of ice. We sat in my truck with the heater on gazing out over the white lake. Damn. A very small section was thawed…right out in the middle. Taunting us. It would have been kinder if the whole thing was frozen. But no, just a glimpse. Dearest Lily hiking up her skirt and petticoat…showing just the top of one gartered stocking. Only for a second. Silly, silly man! A small car with out-of-state plates idled next to us in the gravel parking lot. It was full of young travelers. Tourists. Spring breakers. Yes, only me and four dumb underclassmen from Kansas State thought this would be a good idea. Nice. My would-be fishing partner sat beside me, rummaging in her backpack for bottled water and a granny smith (the practical woman’s version of “patiently” filing her long fingernails). 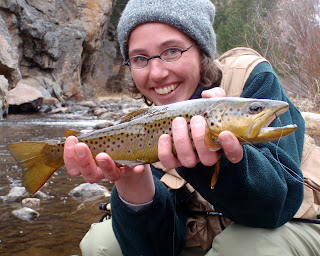 Well, there was always the Big Thompson. Yup. Old reliable. Besides, Estes Park and the Thompson was just a few more miles up RT 7 and the flows had been low (about 20 cfs). Some clouds had moved in, it was cool…proper beginnings to the Blue Winged Olive recipe. Just add the two of us, a few JuJubees and a Two Bit Hooker and we got ourselves a party!
Posted by Jay Zimmerman at 11:30 PM