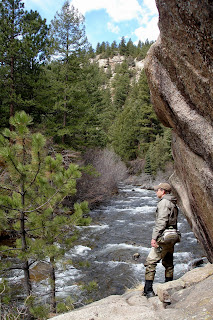 We were not the first ones to the gravel pull off, Erin and I. A late start, a stop for coffee and one wrong turn up a dirt road. Oh well. The two guys ahead of us looked decent enough—two fellow fly fishers—not a couple of turds who would likely camp out on fish or high hole us. I’ll get back to this. They were already wadered up and about to hit the trail down to the South Boulder Creek tailwater. I was going to give a good luck wave and see ya down there, but before any of those niceties could be exchanged a big pickup truck lurched into the pull-out next to us. As the dust was settling a big man in a tight “I Once Went to Sturgis” T-shirt rolled out of the cab with his scraggly haired son. He strolled over to us somehow coming across as a condescending jackass and a hapless oaf all in the same greeting. “Looks like ya’ll goin’ brookie fishin’!” (To me.) “Hey there, kiddo.” (To Erin.) He slung his beefy arms over the gunnels of my truck bed, his boy lingering sketchily behind him like that crazy pet-like-thing-on-a-chain in Jabb 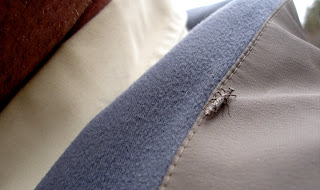 a’s palace.
“Hope ya don’t mind us as ya’lls competition! We’re goin’ down do some worm fishin’!”
I looked up from my knot tying and totally strait-faced him though polarized sunglasses. “Yeah, about that...this stream is strictly catch and release, flies and lures only.” Verbiage regurgitated right out of the Fish & Game pamphlet…albeit for another river entirely.
The Hut reared back and yelled at his squirrely, blonde-haired pet, “Hey! We can’t fish here!” The pet opened its beak and made some strange, disappointed gurgling. “All we got’s worms!” yelled The Hut.
And, as the over-sized four-wheeled palace lurched dustily back off of our own little patch of Tattooine I heard him ask, “Now ya wouldn’t just be tellin’ us that to be rid a the competition, would ya?”
Who me? 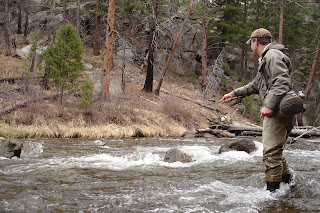 The walk down the trail was steep and twisted, but we were down to the bank of South Boulder sooner than I would have liked. It was one of the first really hot days of the year and I was enjoying the walk and the company. Erin and I were having a good chuckle over the encounter in the parking area. I was finding every opportunity to call her “kiddo”. I had my 3wt rod rigged with a two-fly nymph set-up—a #20 midge pupa and a BWO emerger—same rig that was working so well for me on the Big Thompson just the other day. But, the trout on SBC were not interested in either bug this day. It took me swiping at several annoying insects crawling up my jacket 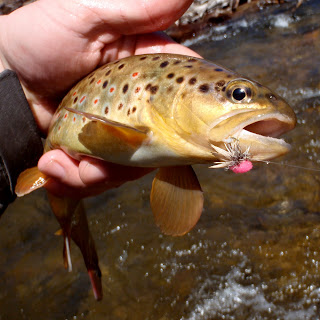 collar before I had the sense to look down and focus on what they were. Stoneflies! Tons of ‘em. Everywhere. Crawling on rocks, up our waders, onto our ears and into our hair. And the trout were ambushing them in the pocket water as they sputtered about on the flat surfaces of water behind rocks. Bugs were moving! Trout were feeding! Erin and I held onto each others wading belts and moved up the middle of the fast-moving creek, taking turns casting into pockets and pools as we made our way up to them. The best match I had in my fly box was a #12 Clown Shoe Caddis dry fly and a slightly smaller Banksia Bug as a dropper. But they worked perfectly! Fish were turning in the current to chase down the big, high-vis dry fly. Then the two fly fishermen from earlier appeared out from behind a large boulder. They looked down at us in the creek, didn’t even offer a nod or wave…just promptly high holed us. Turds. They 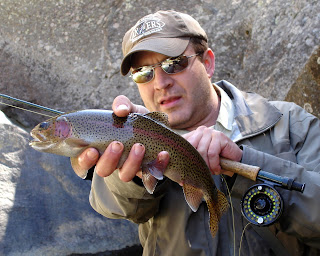 dropped down and fished the big pool directly upstream. The craggy hole just below a short water fall that Erin and I had been diligently working our way up to. I sputtered and swore to myself, but did my best not to show it. I didn't want to ruin the perfect day that was unfolding. But the turds only made a few poorly-positioned drifts through the pool and then gave up, fishless. I then quickly moved into the violated pool and hooked a decent brown. And laughed out of sheer smug spite! Then I clambered farther into the craggy nest of boulders...in deeper than most fishermen are willing to go. It felt a bit like a miniature Cheesman Canyon. And on the third drift a fat rainbow ate the Banksia Bug dropper. Best one of the day.
Posted by Jay Zimmerman at 8:46 AM