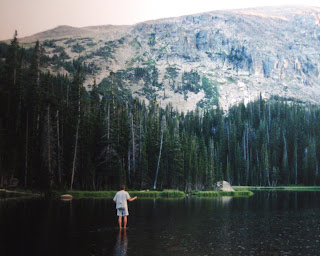 Places revisited. Lakes revisited. It is not taking a step backwards, an emotional demotion—it is, as Kenny and The First Editions used to say, me just dropping in to see what condition my condition is in. There are places that I have been in my life that have meant a lot to me. Usually it is not so much where I was physically at the time…more of a fine mixture, heavy on the cerebral (state of mind and ambition) with the actual surroundings being more the ground pepper—the kick to set the mood. I suppose I have stood in many rooms during pivotal moments of my life…court rooms…recruiting offices…chop shops at VA hospitals. But I do not remember much of those moments. “So…this is kind of an experimental anesthesia!”  What I do remember, quite vividly, are those moments that took place on the water. Alone. Not usually on creeks or rivers…and I am not sure why? But on lakes. Maybe it has something to do with the placid nature of still water—high lakes with stunningly beautiful, yet aggravatingly moody cutthroat trout. Like gigantic Petri dishes laid out up in mountains…begging, culturing the imagination. 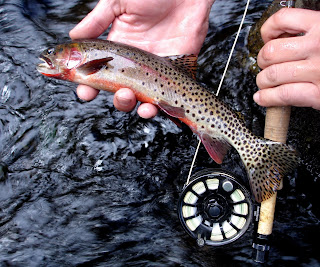 The first time I ever visited (the place I have been calling home for years) was as a thinly veiled favor for my sister. She had just graduated from collage and was taking a job in . I was helping her move. And I say “thinly veiled” because everyone, including my sister, knew I was tagging along for the promise of trout—and maybe because my restlessness and post-Army-drunken shenanigans were wearing on my families’ patience. It was Big Sisters turn to have a go at the reigns—a mule skinners futile efforts. And somehow, in the last evening of my stay, I ended up at a shallow, yet very remote lake at about 10,000 feet. I remember wading out in cut-off jean shorts and bare feet…out as far as I could bare…and finding a small rock to stand on to get as far out of the frigid water as I could—and casting a four-weight fly rod as far as I had the skill to cast. I did not hook many fish, but those I did were amazing things—greenback cutthroats with colors deep and vivid enough to make your brain melt. (Whatever that means.) I balanced on that rock for as long as I could…legs freezing and the sun setting. I must have known that I may never be able to stand on that rock again. Never be able to get one more cast in, or see one more of those wonderful fish. I guess I knew, all those years ago, that the realities and hazards of life were about to collapse with all their weight smack dab into my lap. And I was right. 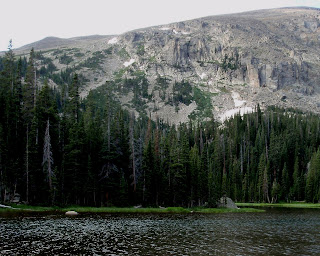 So, it is odd…eerie even, to revisit these places, these moments frozen in time—so many years later—so much trite and figurative water under the bridge. I remember letting that last cutthroat go…watching it swim back out into the clear, but quickly darkening water of the lake…wondering what it would do with its freedom—wondering what I would do with my freedom. Now I return, many years and turns later…to tell what I have done with my time…and catch another trout from the same lake. And see what he has done with his…
Posted by Jay Zimmerman at 12:22 AM