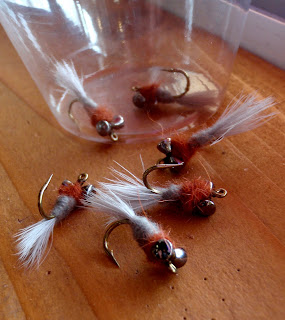 He didn’t start off on the right foot—parking sideways in the fly shop parking lot. It was a slow Sunday so the sloppy parking wasn’t really an inconvenience to anyone, but there was something about it that stunk of a deep seated entitlement that those born rich will sometimes have. Then the handshake. I offer my hand to everyone who comes in—that and a proper how are ya? It’s what I do…have done it for years. I feel a fly shop should have that sort of atmosphere. Like a home town bar. You know, like Cheers. So I get all sorts of people and all sorts of handshakes. The limp handed Dead Fish that never fails to take you by surprise, the Four Fingered Curtsy (come on man…let the thumbs lock before you bear down!) that leaves you feeling like you ought to lift your dress and dip…and the Little Pecker Gonzo Squeeze that leaves you with unnecessarily broken phalanges all because Gonzo is feeling inadequate (and apparently spending hours throttling stress balls at the office). But this one was new to me…one pump of the hand, a turn of the back and a dismissive yank out of the man grip. What the hell?
“Got any UFOs?” he asks with his back still to me. Face down in the fly bins.
My smart ass streak had already kicked in. “Haven’t been abducted since I left the rural ,” I say.
He doesn’t appear to appreciate my attempt at humor. Whatever.
“You know the UFO, don’t you?”
“No,” I say. “What is it?”
“Are you serious?” He seems incredulous.
Again, whatever… 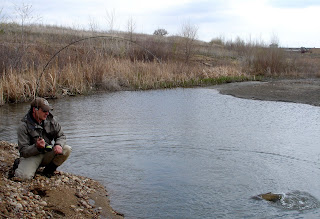 I guess being a guy who tends to be hyper-sensitive to body language and tone of voice makes my line of work unnecessarily stressful at times. I don’t like being snarky. In fact, long before I ever worked in the fly fishing industry, my most memorably negative experiences were in fly shops—some over-egoed D-Bag dripping condescending tone like…well, condensation off a cold canteen. I swore I would never become that guy. But, being in a fly shop most days is a double edged sword. It puts me in contact with some of the most interesting and animated members of my community (that would be you, dear reader! Lookin’ good today, btw!) the down side is that I have to suffer the fools…with a cheesy smile on my face. Suffering fools is not on the list of things I do well. So, I suppose I should stop whining about my job. I may have one of the best gigs imaginable (which, however, is why my whining invariably falls on deaf ears!) So what if some of the most enthusiastic story tellers have the worst breath? So what if the worst story tellers usually speak the slowest? So what if occasionally some pompous ass face gives me a shitty hand shake? All things considered, I should not care at all…and I will try not to. 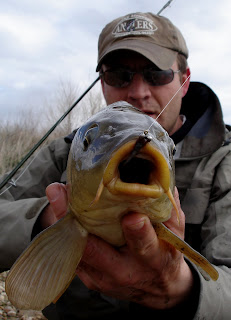 But…I will never have every silly name of every silly fly ever tied committed to memory (or stocked in our shop bins for that matter). I don’t keep track of what some dude who guided you once on the is hacking out on his vice between packing himself a fresh bowl and telling the stiffs on the river how awesome he is. Nope. Not paying attention. I fish only three types of flies: My Own Designs (because that is what contracts me to do) Old Staples (because I have to know how mine stand up to the existing standard) and Friends Flies (because I know how important other discerning opinions are to the development of a new fly pattern). Also, I am lucky enough to be fairly close friends with some of the best fly tiers in the country.  I ain’t gonna start name dropping, but this allows me to stick pretty tightly to my three-tiered mantra on fly selection!
I don’t just pander to the big names out there in the tying world…some of the more enjoyable ventures have been involving young fly tiers. I love seeing what they are coming up with, whom or what their influences are, and how much just a little encouragement and feed back can do. I have a good friend, Justin who is 13 and will occasionally get dropped off at the fly shop on Sundays by his mother. Justin is one of these uber-sharp young teens who will inevitably make you look back to when you were 13…and cringe. Bare foot in a mud puddle, a two-inch Ewok in one hand and a rusty machete in the other? No? Sorry…just me I guess.  Anyway, Justin is a fly designer, too. Not just a fly tier. He comes up with his own stuff. And I admire that. And when he left a plastic cup for me at the shop the other day with some new carp flies…I could not wait to try them out! 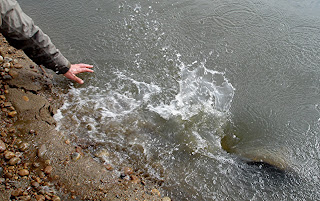 (After Action Review: Justin, thanks for the flies! They worked! First carp to get a proper look at it hopped on like a hobo on a flat car! My only major critique is the weight. Too heavy for the flats style fishing I like. Too hard to control on short casts and too loud of plop entering the water. That size dumbell would work better in a river, moving water like the . Try scaling down to a 1/8th Dazel-Eye at the head. Also, give me some other color combos. The one you gave me had the “shad” thing doing (will be sweet later in the summer!) but let’s see some leech and crayfish versions!
Posted by Jay Zimmerman at 7:20 PM