I would make a very poor father. I know this. Not true, some may say…you’re so good with kids! Sure. And I love dogs too. But they both annoy me to no end. Kids and dogs. They are both loud, eat things they shouldn’t and shit everywhere. But, so do I…so I can’t help but feel an odd sort of kinship. Kinship in chaos and crap. So it is ironic, I guess, that those who like me the most are years younger than I, and I am now living with a dog. I guess I am left with—with some comfort—the teachings of my older and wiser sister: kids are better than adults because at least kids still have the chance not to be idiots…and if you fuck with a dog it will eat your face. Simple. And I appreciate simple. 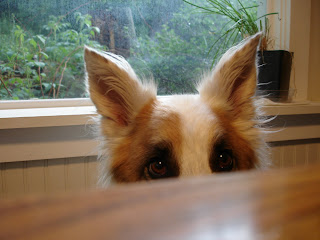 So now I live with a dog named Banjo. Love him. Have no idea what sort of dog he is. People always feel the need to ask what is he? At work…at the fly shop, I get asked that on the hour it seems. Not about Banjo (I leave him up the mountain) but about coworkers dogs hanging around the shop. Still alive, I usually answer. Until I get too hungry. Yes. I just made a joke about eating a friends dog. Pales in comparison to the things I have said about friends children. Find a way to deal. OK…moving forward. Banjo has long, shaggy white hair that ends up stuck to everything. The couch is now uninhabitable by humans in dark clothing. The door jams have fringe. And it sticks to my facial stubble like a fake Santa beard when we wrestle in the living room. 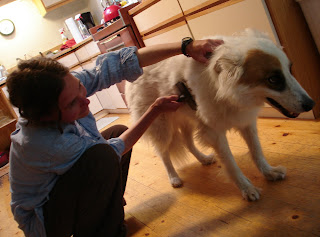 His hair gets saved, though…in a big plastic freezer bag in a random cupboard. Clumps get coveted from the carpet, picked from the couch and my chin. Saved in a bag. Looks too much like fly tying dubbing to be discarded. Gotta be a use for it…gotta be! There have been vague plans to do some dye lots. You know…black, olive and brown. The trifecta. The triple threat—the three best colors of good, course dubbing. His hair is naturally white (well, just perfectly off-white) so that base is already covered. But he also has this really awesome, long tail hair. It just begs to be made into a pike fly! Add a little flashabou…amazing! 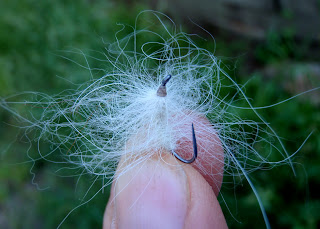 But it did not take long. See enough clumps of shed hair on the floor and sooner or later any serious carp-head is going to see the possibilities. Clumps of off-white hair on the un-swept floor. Carp lazily cruising the muddy flats. Springtime. seeds. The cruising carp zeroing in on particular scraggly, white clumps on the surface… 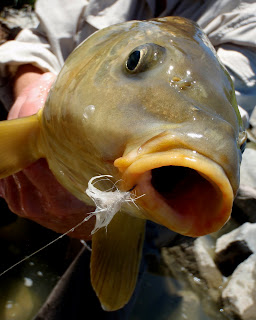 Yes…it all becomes clear…
Posted by Jay Zimmerman at 11:56 PM