Lamson…why do you hate me? 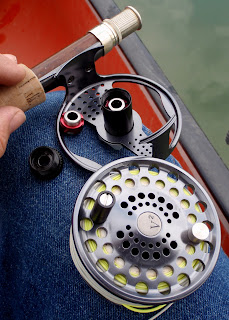 The first time the Waterworks/Lamson reel company made me look like a jack ass was last spring. I was in Steamboat Springs fishing private water with some guide friends of mine. They were out of some Orvis shop, so I was giving them grief about their crappy, foreign-made equipment. Just good-natured ribbing…like soldiers mocking sailors. All in good fun. But I was really letting them have it. Then one of them handed me back one of my favorite 5 weight setups…
“Dig the rod,” he said. “But what’s up with the reel?”
The rod was a Sage. The reel…a Lamson Litespeed. Less then a year old. Drag completely shot. Five-weight fly line free spooling wildly in all directions. Awesome. I felt like a gigantic tool…like my regional Lamson rep had just de-pantsed me at a party. In front of the pretty girls. Damn!
The clutch assembly had died. Had to replace it a week later at the shop in .
The second time the Waterworks/Lamson reel company tried to make me look like a jack ass was this spring. I was bass fishing from a canoe…and the culprit was a Velocity reel with 6-weight line. And same thing, clutch croaked. But this time I was prepared—I had a spare clutch assembly stashed in my fishing pack. So there I was, with all these reel parts disassembled and spread out on the top of my leg…one lurch of the boat and all would have been done. Good grief…
Posted by Jay Zimmerman at 10:42 PM