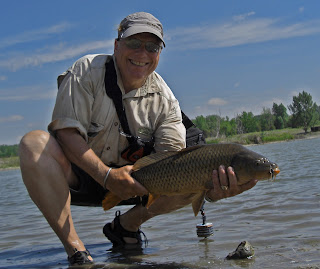 What is it about carp that turns respectable trout fishermen into brownliners. Is it the demand for precise casting and the detection of subtle takes telegraphed by body language? Is it the opportunity of hooking a fish well over 15 pounds that will get into the backing? Is it sight casting to difficult fish? Maybe it’s the proximity and availability of the species. Whatever the reason, the addiction will cause you spend a considerable time locating, strategizing, tying flies, and fishing for the most widely distributed fish in North America.

We are not going to spend any time on tackle because you probably have 5 to 7-weight 9-foot trout rod, single action reels and floating line. This article is about how to catch these fish under a variety of circumstances. As your carp addiction grows (it will significantly accelerate after the first hookup) the equipment used will become more specialized.
Fish to Target
Carp in the shallows are there for either sex or food and if the spawn is over its chow time. Your presentation and position will depend on the depth, sun, and wind. Unless he is taking cotton wood seeds or occasional bugs his head is pointed down rooting on the bottom for eatables. You may see his tail or back breaking the surface. Such fish are the number one target. 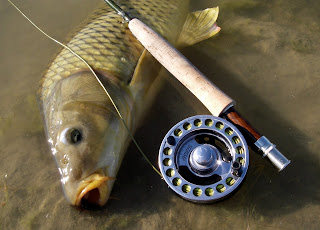 Cruising carp can be occasional eaters, especially when food can be consumed with minimal effort. While fishing conditions dictate, flies presented reasonably close may illicit interest—24 inches from the head is a good starting point. If one fish in the group breaks away towards shallow water, he maybe looking for a snack, and offers a worthwhile target. A motionless carp is not feeding. It would be a miracle for him swim over and take a fly. Moreover, you’re wasting energy fishing to spooked fish, jumpers, and spawners. We think the biggest single mistake of beginning carp fishermen is fishing to the wrong fish.
Hooking Up
Carp takes by carp can be extremely subtle and many times its the bony language which telegraphs the strike. The most effective hook set is a slow slip strike with a gentle rise of the rod tip. Trout strikes are a recipe for lost fish. The slow strike keeps the fly in the kill zone for another chance.
Once hooked the fish will make a beeline for deeper water if your using reasonably stout tippet material you can put a fair amount of pressure on him to maneuver him back into the shallows where he will tire more quickly. Always keep the rod down and angled in the opposite direction the fish is headed. As the fish turns take in line and never let him rest. The probability of a lost fish increases the longer the fight goes on.
Shots at Feeding or Cruising Fish
The retreating shot. is the most difficult. A curve cast and either twitch the fly as soon as it sinks to the eye level of the carp, or let it sink and hope the fish notices it. The second option is to make a straight cast alongside the retreating fish and hope the fish turns towards the fly 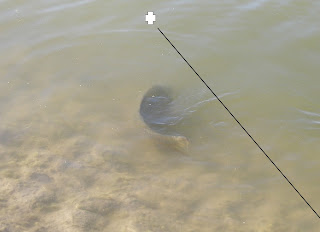 Generally the broadside shot forces you to make a calculated lead to intercept the moving carp Either twitch the fly aggressively past the carp or let the fly the fly sink and give it subtle, suggestive movements -- the behavior of the fish will dictate When the fish are aggressive try to bouncing the fly off the nose during the retrieve!
With a facing shot you will cast the fly past the carp on the opposite side of your casting arm. This lets you to draw the fly alongside the fish and then just out in front of him.. If the carp are spooky, lay the fly on the same side as your casting arm and hope the fish turns that way naturally, or notices the fly. Always keep in mind that carp are more likely to speed up to take a fly than change their direction of travel.
Finding carp with their heads down, tails up, rooting around in the mud for food calls for the mudding shot. In deep water the only tell-tail sign may be air bubbles breaking on the surface (gasses on the bottom disturbed by the feeding activity). Cast well past the bubbles, let your fly sink to the bottom and slowly drag the fly into the area you believe the carp to be. In shallow water you must be more careful. You will likely see the underwater mud ball created by the feeding carp. Stop and observe long enough to decipher what direction the fish is facing. Look for the shape of the large, upturned caudal fin, or a gradual migration of the mud ball. Above all, you don’t want your leader to brush against the fish. If you are on a high bank or in a boat and directly above the mud ball, touching the carp with your fly will sometimes get its attention—the fish think it’s a spooked crayfish.
When carp are exceptionally hungry they 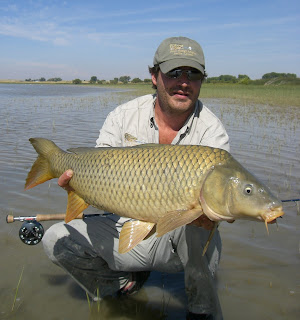 will move into very shallow water giving the angler a bank shot. It is not rare to find a solitary, aggressively feeding fish along the banks of a reservoir in water so shallow its back is out of the water! This can be a very exciting situation, because you have found the hungriest, most vulnerable carp in the area and it will eat almost anything, so long as it isn’t spooked by a clumsy cast. The easy cast is to the deeper water immediately behind the carp and hope it either does an immediate about face or turns toward you, allowing you to draw the fly alongside the fish. The harder cast is to thread your leader between the carp and the shore, then swim your fly into the kill zone! The take can be spectacular!
By Jay Zimmerman & Paul Prentiss
(This article was first published in the Spring 2010 issue of High Country Angler magazine)

Posted by Jay Zimmerman at 4:26 PM