Conventional Wisdom Stumbles into a Room of Fly Tiers 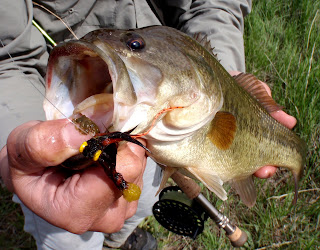 The Geezus Lizard and Texas Ringworm are two bass flies that have finally evened the playing field. They have allowed fly fishermen to dabble into the not-so-secret voodoo world of conventional bass anglers worldwide. Their existence is born from a frustrated desire to turn what I had learned in my youth about bass and bass lures into a viable fly rod option, without loosing the life-like and traditional advantage of a hand-tied fly. Their conception consumed a large part of my adolescent and adult life. As a kid in rural Ohio and Pennsylvania, I grew up with an easy understanding of fish that liked to eat small bugs. I got trout. I understood bluegill, because they had an affinity toward bugs which were an easy size to cast with my noodly fiberglass fly rod. I even felt comfortable with the smallmouth bass in our local rivers…they at least liked to eat little soft-shell crayfish. I could easily tie and cast a slightly weighted brown woolly bugger! But the part of the Mid-West I grew up in was filthy with farms and fields and old barns…and behind every dilapidated old barn or back in every “Back 40” was an equally neglected farm pond full of largemouth bass! I would catch them easily on sparse bucktail streamers and small cork poppers, but the ones that ate were always the young ones…the one and two pound farm-ponders that were still small enough to get excited about a juvenile crayfish or crippled damsel fly. The big bass seldom showed any interest in my flies. To my great disappointment.


I joined the Army and left Ohio when I was eighteen years old. During the years that followed I spend a large amount of my time in training or deployed overseas, but was stationed at Fort Bragg, North Carolina were I was introduced to Southern Bass and a much more technical and refined way of fishing. And it wasn’t fly fishing. I learned about the Pig-n-Jig, the Zarra Spook and the weedless rubber worm…both Texas rigged and Carolina rigged. It was a bass-fishing rebirth for me! I found many largemouth bass…and large ones! But, when I got out of the service (the life of an infantry paratrooper is not kind on the body!) I hung up my spinning rods in favor of, once again, the fly rod. Since then I have lived and guided throughout Alaska and the Rocky Mountain West…chasing salmon and trout, but never ignoring my original love of the warmwater species. I would still sniff out a hidden bass pond any chance I got, regardless of the magnitude of the hatches on any local trout streams. And every season my flies would come closer and closer to matching the deadliness of those jigs and worms I used all those years ago. 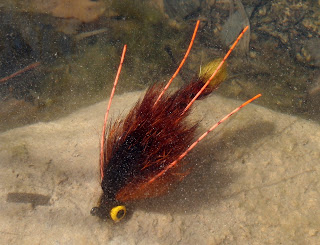 The Geezus Lizard The creation of the Geezus Lizard hinged entirely on the conception of the ferruled dubbing loop tail. I have tried for years to build a worm-like fly, or fly appendage, to mimic the rubber worms conventional bass anglers have in their arsenal. The long, narrow look of a worm undulating and jerking near the bottom of a pond or lake is well known for triggering big bass strikes…conventional bass fishermen have know this for decades, one of the reasons long, soft plastics are one of the most frequently used lures. I tried chenille, rabbit strips and a whole assortment of other tying materials…but the end result always looked like a bag of chopped assholes leaked onto my tying desk. Once I grasped the concept of ferruling a long dubbing loop, it all fell into place. I used durable thread and dubbing wax and some real nice, long fibered dubbing that I could rake out. Then I sexed it up a bit by using two separate colors on either end of the dubbing loop, giving the worm a segmented look. The yellow tip on the tail was a nod to all the old “Mister Twister” tails on the jigs and soft baits. The rest of the Geezus Lizard is modeled after conventional lures like the Pig-n-Jig, only using crosscut rabbit strips and rubber legs. The only slight modifications were the true jig style hook and the wire ribbed scud back on the underneath of the fly. This does two things, it makes the fly look a lot cooler…and, on the practical side, it allows the fly to zip right back down to the mud after it has been jerked by the angler. This gives the Geezus Lizard a very unique action it the water, very closely matching the way a spooked crayfish darts out, then immediately tucks back to the bottom. This action has the same effect on bass as a four inch, wounded bluegill listing to one side and darting about erratically! The bass just have to pounce! I have fished the Geezus Lizard primarily for largemouth bass, but it has been a devastating fly for smallmouth bass, large trout, northern pike and some friends have even used it for reds off the coast of Texas ! It can be fished deep and slow, or fast and shallow…in rivers or stillwater!
Texas Ringworm This fly was designed for one simple purpose…to completely revolutionize the way we fly fish for bass in this country. To put fly fisherman on the same playing field as every conventional gear bass fisherman from southern California to the famous lakes in Florida. Every warm water fly tier has claimed to invent a fly that is the equivalent to the Texas-rigged rubber worm (one of the most commonly and effectiv 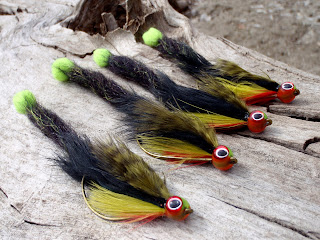 ely used tricks in conventional bass fishing). But almost all of them are no more than a ratty piece of chenille with some misshapen piece of rabbit hide glued to the end of it. But, once I had perfected the ferruled dubbing loop tail of the Geezus Lizard I had a decent “worm” taken care of…all I needed to do was to create an effective internal hook mechanism. This fly is absolutely deadly. I prefer to fish it with floating line when on small bass ponds and on a sink tip fly line when on a river or larger reservoir. The sink tip treats the fly just like a “Carolina rigged” plastic worm. In conventional bass angling the weedless-rigged rubber worm is such a mainstay because it is simple and easy to rig, appears natural and unhindered in the water and—most importantly—seldom fouls or snags. A fly equivalent to this lure is not commercially available. Whereas many hard-core conventional bass fishermen tend to fish larger bodies of water, the vast majority of the weekend worrier warm-water fly fishermen across the country spend their Saturdays not astride a Hunter bass boat on a large reservoir…but behind a neighbors’ barn harassing the farm-pond bass. The major handicap these fledgling fly casters have 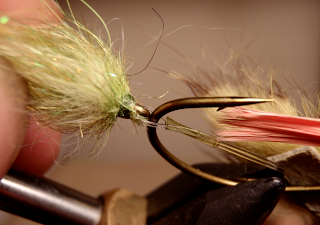 burdened themselves with (and what will, in the end, keep them forever loyal and tethered to the spinning rod) is a severe lack of proper fly-replacements for their go-to conventional lures and rubber baits. The Texas Ringworm is a simple fly to rig and fish when compared to its rubber-worm contemporaries. The hard-mono loop keeps the large TMC 8089 hook facing up and snag free. It stays in place even through the longest or brutal casting, but detaches immediately once a bass eats and the hook is set. Once the fish has been detached, the hard-mono loop is easily re-attached.

How To Tie The Geezus Lizard

How To Tie The Texas Ringworm

Buy These Flies Online!
Posted by Jay Zimmerman at 7:17 AM