Just One More for the Road 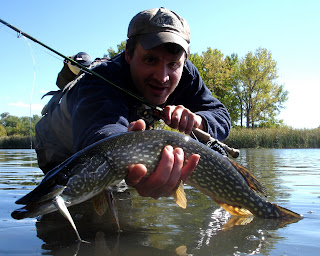 We ran into Sean Hudson near the parking lot. “Only saw the one pike,” I reported. “And he was headed the other way! Other than that, not a bump.”
“Huh,” Sean said. He had landed four pike. And he had gotten to the lake after us.
looked down at her wading boots and kicked at a loose rock. “We suck!”
“Well…shoot!” I surmised.
“Gotta go to work now,” Sean said. “I’ve been irresponsible enough for one morning!”
Well shoot…
So we didn’t quit…Erin and I. We buggered on into the mid-day—heaving pike streamers. Trying not to suck so bad. This was very possibly the last day of the season for us to chase down these toothy critters. Too much other water. Too may other fish. Not a long enough year. No nine-day week and 14-month calendar. So this was our last shot at one for the road. Besides, it is brutal to wake up at on your day off, leave the house by 5 and be on the water half an hour before sun up and be fishless by …yes, brutal. But we persevered. Kept on keepin’ on—driven by the memory of our friend Sean’s casual Yeah, got four pike and one nice bass…
And, yeah…we finally got some. They were small. Hammer handles—but pike none-the-less. One was even good enough to take a photo of. Sure, I had to hold it way out to the camera so it wouldn’t be embarrassed…
Posted by Jay Zimmerman at 6:23 AM