Windblown Wanderings on the Big Thompson

Written and Contributed by Erin Block

It is Spring. Although the two inch fresh blanket whose thickness is still being added to as I write, would moonlight you no hint. But yes, it is spring -- and is my least favorite season. It's all that emphasis on growth, and rebirth, and babies, and pastels. It all makes me very uncomfortable. Plus, spring -- she is flaky. Her crust teases with chips here and there, but holds her hand closed. She pretends to melt, you feel just a little bit of warmth, but then snarks with silence. She has a headache. She won't give much. I can't read her tell. What will she do next? Straight faced, she lives each day with the knowledge of her power - and we are left at her whim, thrown about to fit her fancy. Spring is like a relationship -- like that relationship where your 100 % was met with 10%. Barely 10%. You give, and they take. Over and over and over again. They have come to expect your 100% to always be there. Spring never expects for summer to move on 100 % without her.

Friday fishing on the outskirts of Boulder was windy -- too windy for the carp Jay and I were trying to catch. We gave it some time, but soon realized we were just wasting ours. "I hate throwing in the towel," Jay said, getting into the left-hand turning land, over-riding his autopilot back south to Boulder. "Let's check out the Big Thompson."

We ate pickles and headed to Estes Park.

I have this horrible gift of trying to be positive. It is against my nature, and she reveals her true self at the end. If there is inclement weather, my dad always gives me this look of "Erin, don't say a thing...not one single thing..." It was on a family vacation to New York City that I discovered this gifting, and my dad discovered that look. My dad, sister and stood I on a very rainy and cold Ellis Island. Trying to hearten spirits, I said "Well, at least it's just raining....it could be worse." And it got worse. The temperature dropped. Rain turned to sleet. I said it again...it could always be worse. Then it hailed. Again, it could always...and it started to snow. "Well, it could always be..." Erin, shut up!

These memories briefed me be quiet. Eat another pickle. But I blurted, "I think we're going to end up farther north than the cloud bank. This is going to be great!" And then I uttered the damning phrase "hey, I think the wind has died down a bit," as the truck shook and veered to the right in a gust. Just to illustrate my point. Yeah. Died Down. Sure. Whatever, Erin. 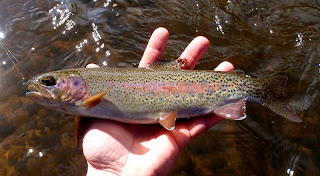 McDonald's coffee bolstered us to the tailwaters below Lake Estes and the Olympus Dam. It wasn't crowded, and we nabbed a good pool, Jay said. Lines knotted and fingers froze and I huddled around him, opening my jacket to break the wind as he rigged me another deep dropper nymph. (Yes another. I'd lost my top fly to a rainbow, and previously to a bad knot.) My fingers couldn't move, they were too cold. But we are good partners, he and I. And that is the point, isn't it? Of having a partner? When you can't, they can...and they will...

"If I ever, ever, get in a room alone with the personification of The Wind" Jay said, "I tell you what..." and he continued to describe just exactly what he would do to the wind, as my imagination invented even more serious inflictions.

We decided to go to the truck, blast the heater for a few miles, and move downstream. 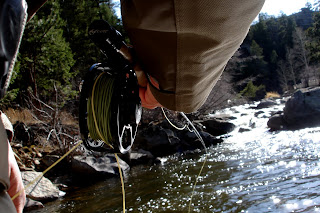 "Are you ready?" Jay asked. My legs had stopped shaking and I shivered a yes.

The river's flow was almost waist high on me, and I held onto Jay's hand...steady. We found a big pool, spooling with shadows. Get them he said, into a blast of wind.

I cast first. And we went back and forth, taking turns catching rainbows and browns -- standing in front of the other to cast, and providing a brief windbreak for the other. Although I must say, I probably got the better end of that whole windbreak deal.

Jay looked at me. My face was burnt red. "I like fishing with you.....you're tough...and you can cast into the wind."

But sometimes, I tire of having to.