Flex Spex (One Small Great Idea Amongst a Herd of Idiocy) 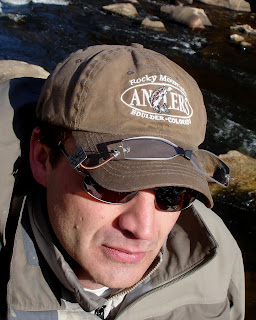 I have always said fly fishing is a gadget driven industry. This may be one of the reasons fly shops stay in business. The average fisherman has this un-shakable notion that if he hangs out one more time at a fly shop wiggling a new high-end rod or finds that next awesome trinket to clip to his vest he will suddenly stop sucking ass on the river. Well (and I don’t mind being the one to break this to you) the only way to remove the hack status from the lapel of a $120 super breathable fishing shirt…is to spend more time fishing. Very simple. Speedos does not Superman make—just notifies everyone that you have more cash than sense and that you may or may not be attempting to smuggle a pair of blue plums. And, unfortunately, there have been a rash of dismal creations in the very resent past. And, no…I am not referring to the crazy-ugly baby one of your friends just deposited into the world and who now keeps popping up in your News Feed as their new Facebook profile pic…
So, here are what could arguably be the four biggest duds in my world of fly fishing (and one small, great idea!): 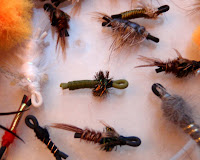 Moffitt Flies. I guess you could call them flies. This is one hell of a harebrained idea to turn the pegged-egg bead concept into actual fly fishing. Pegged egg? So…yeah…the second most disappointing thing to infiltrate the lower 48 from . (Sara Palin) This is taking a plastic bead the size and color of a trout or salmon egg, threading it onto your leader and pegging it into place with a sliver of wooden toothpick—then tying on a bare hook. The idea is that the fish eats the “egg” and the act of setting the hook dislodges the pegged bead and slides the bare hook into the side of the fish’s face. In reality it’s an outstanding way to floss spawning fish but still feel good about yourself. As you can probably assume from my tone, I am not a fan. Can’t argue with its effectiveness, though. Deadly. But, as a commercial fly designer, I am philosophically opposed the whole idea. Now…this Kevin Moffitt guy had the idea to have flies tied on doubled-over bits of rubber and then used in place of the bead. Interesting? The end result is possibly the most hideous flies ever tied and a multi-thousand-dollar pipe dream. Kevin! STOP IT!
Vibram Wading Soles. I gave these an honest try. And, for the first two weeks I was sold. Raved about them to anyone who would listen. (I work in a fly shop, so people are sort of forced to listen from time to time). Then…week three. There was just enough wear on the treads and suddenly I was looking like a scared drunk in a 100-year flood. Disaster. On the plus side…I am now going to get a wading staff sale out of every one of my friends I convinced to buy a new pair of Simms boots during those two weeks!
Monic Fly Lines. How do I best describe these brittle abortions in a box? OK…if you and two of your best redneck friends from childhood (you know, the part of your life you have conveniently not told your spouse about…yet) got together in a garage, blasted Free Bird over and over on an old boom box dug out of the rafters, drank several cases of Old Milwaukee and, by hand, made a fly line. It would suck. You would not want to put it on your reel. No way. But it may still be better than a Monic!
Gateway Hooks. A new line of poorly-made hooks that are designed with eyes that are not closed. Don’t ask. But, if you do ask…The Dude will waist an hour plus of your time with a nonsensical sales pitch that leaves you with the distinct impression that you may be the last one in the room with properly functioning logic. 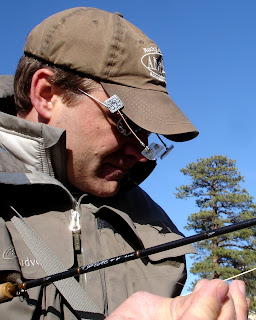 But I never want to be accused of being a naysayer or standing in the way of innovation. Old School fishermen and infantrymen have a tendency to rightfully believe that if it ain’t broke, don’t fix it—a sick to your guns philosophy (pun most certainly intended). There is a great deal of wisdom in that. But I do firmly believe that an M16A2 is a far better assault rifle than an M1 Garand and that graphite makes a way better fly rod than some tall grass growing along a road in China—although the former in both cases are far more classy and romantic. Their inevitable replacement was the spawn of ingenuity and innovation…an evolution in technology, if you will. So, to conclude this very negative gear review on a positive note…let me tell you about one man (and his daughter) making a simple, but very cool new gadget for us fishermen. Flex Spex he calls them. Sure, there are a ton of different magnifying lenses available already (fastened to your glasses, clipped to the bill if your hat…braided into nose hair?) but that’s what makes these new ones so awesome…the niche has already been filled. But now it has been trumped! They come in two pieces—one clip, one flex arm and one lens each. The clips attach to the side of a hat brim (out of the way!) and the flex arms can be wrapped easily around the top of your hat when not needed. Now, when a fly needs to be rigged, you pull both sides down in front of your polarized fishing glasses, the two lenses connect by magnet…and POW! Ya’ll in bidnis, son!
Posted by Jay Zimmerman at 12:37 PM