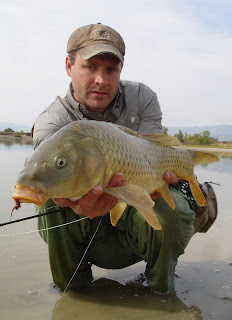 The reports from friends where good. Tons of carp with their backs out of the water all morning...two days ago. And the weather reports were good, too. Sunny, no wind in the morning with a high of 90 degrees. All was lining up for a great day off. The Broncos game started at 2:30 and I could lay waist to the September carp flats all morning and them enjoy a few Millers in the early afternoon watching Peyton lay waist to the Texan defense...

The first sign the day was not going to pan out as I had planned was oversleeping. Erin and I didn't get our boots muddy until almost 9:00 and the sky was hazy and we could not see into the water very well. Remnants of the smoldering wildfires way up north most likely. But we made due. The carp were active even if they were hard to see. And the water was way down, exposing endless flats easy to walk and land fish. Glaring into the grey, poorly lit water strained the eyes, but we found and hooked fish regularly. Things were turning around. But I decided to call it early. Decided to leave an active mud flat to go back to the cabin and watch "makeshift mountain TV" and have a cold beer.

As it turned out...we could not live stream the game on Erin's computer. I had to resort to a radio station. And then, for the second week in a row the Broncos fell apart right out of the gate. I had to shut it off and go outside and split wood just to avoid breaking something. Wish I could blame it on poor officiating...but I can't. So let my day be a learning lesson. NEVER leave feeding fish. Not ever.

Posted by Jay Zimmerman at 5:17 PM