A Lake With No Name

On the first part of the journey, I was looking at all the life. There were plants and birds. and rocks and things. There was sand and hills and rings. The first thing I met, was a fly with a buzz. And the sky, with no clouds. The heat was hot, and the ground was dry, but the air was full of sound... 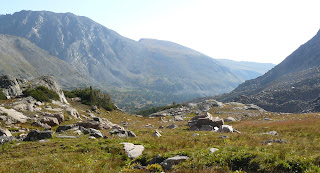 The entire walk in (the first part of my journey) I had this America song stuck in my head. It was early in the morning and the only other soul on the mountain was a bow hunter making his way back down. The three of us, heads down, kept up the pace. The first miles where to be on trail, but from there our travels took us on our own. Off trail. Bushwhacking up to a high-elevation lake that I had never fished before...and never heard of. I had not heard of any reports from the lake because it had no name. It was on most maps, but just that. There. A dab of blue ink surrounded by lots of thin black contours.

You see I've been through the desert on a horse with no name... 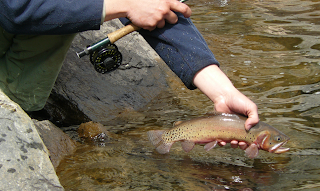 As alluring as it sounds, I don't necessarily trust a lake with no name. Not a high lake that takes the good part of a day to get to and may or may not hold trout. Or even really be there. It could have just been a cartographers typo or fabulous practical joke. I don't mind little ditches in town or warm-water ponds behind barns that are too small and private to warrant a name. They will have a carp or a few bluegill, at least. If not, oh well. Drive on down the road to something familiar. But high lakes. With no names. Like guys with no names. Don't trust them. He goes by Butch. What's his real name? Dunno...just calls himself Butch. Good with an ax, though... 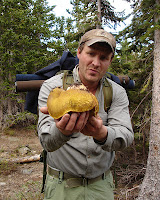 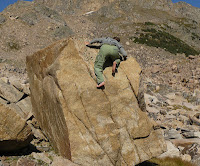 Joe had promised there at least used to be trout up there. Good trout. Big cutthroat. Back in the day. What does that mean, exactly? How long ago? Five years, maybe? Oh...that's not so bad. Now how far off trail is this again? There did turn out to be fish, the same big cuts Joe had seen before. And there was no trail in, and no sign of other fishermen--or climbers, or hikers. Just the one bow hunter. So it ended up being perfect and totally worth it...which, really, doesn't take that much. But the trout did not show themselves at first. It was many hours after we arrived before the first rise was spotted. Later, as we were picking our way down the scree fields on our way back to civilization, Joe admitted to Erin and I that for awhile he was afraid something bad had happened and there truly were no more trout. Winter kill, or something. But Joe (and Erin, too, for that matter) persisted and never gave up hope that it was weather or time of day keeping the trout down deep and that given just the right turn of events a big, red-bellied cutthroat would point its nose at the surface and attack your fly. Which is exactly what did happen and it was fitting that it was Joe's fly being targeted. Because he had been the one keeping on. Not me...I tapped out early in the second round. Poor conditioning? After a few hours of casting into this lake with no name and not trusting it and not seeing hide nor hair of a trout (or should I say skin nor scale?) I got distracted by the the boletus mushrooms and the bouldering possibilities for those of my friends looking for new problems. Like the little boy I once was being distracted by the butterflies and pretty rocks when Dad wanted me paying attention to the end of my catfish pole.

So, I did feel a bit silly and juvinlie when, out of the deep blue, big cutthroat began to rise... 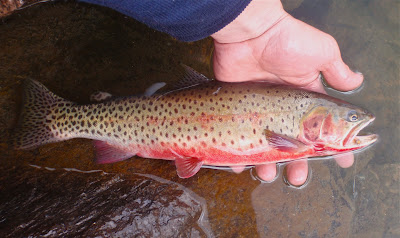 Posted by Jay Zimmerman at 1:22 PM