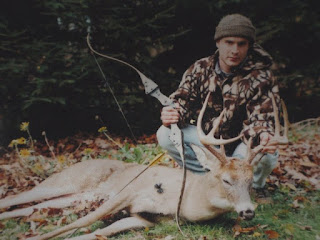 I learned from my father how to find my way in the woods. Said another way; my dad showed me how to be lost comfortably. We would spend weeks deep in untraveled National Forests every deer season with bows in hand like a small family band of Merry Men...and mom. "How can you ever be lost," my father would say, "When you want to be right where you are?" I have taken his reasoning and adapted it into a life's mantra of sorts. The lesson being something along the lines of home is were you hang your hat...or better yet, your back yard is the bottom of your boots. Because of these influences of my father I have been able to pick up and move or completely dismantle my existing life and take great gambles on something new. Or somewhere. Or someone. But, in hindsight (as my father has firm roots and has always been there for his family) I believe he may have just been misquoting Daniel Boone. I have never been lost, but I will admit to being confused for several weeks.

It wasn't until I was older and in the Army that I learned to navigate the land properly. An infantry soldier walking point has a platoon or even a company spread out behind him relying on his skills and compass function. (This was before any reliable GPS units found their way into the military.) And he has to know on a map where he is...sometimes just to avoid lying to a battalion commander over the radio, but other times to act as the forward observer for an A-10 pilot with an itchy trigger finger. 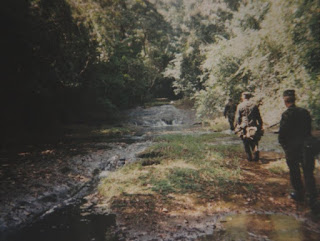 The most difficult part of always knowing where you are is the ability to walk in a straight line. You may plot a straight route and you may never look away from the fine needle hovering over that moment's magic number. 144 degrees...for 400 meters. But you still have to walk that straight line. Just as it is easy to be moral and riotous standing behind a lectern with a clean robe and full belly before a flock happily marinating in ideals and air conditioning, it is easy to have an unwavering stride on a sidewalk. Add rocks and trees and mountains and your straight line becomes crooked. Blend reality into the recipe and watch the fairytale curdle. Choose one from the flock and follow them out past the big wooden doors...back out into the heat and the real world. Throw that honey badger into the happy nest of bees. Like hunger in The Heart of Darkness which fear can not stand up to...and which turns principles into  less  than  chaff  in  a  breeze. Introduce adversity and obstacle and watch things get interesting--because every protagonist must have the conflict or the story falls flat. And remember...that honey badger just doesn't give a shit! 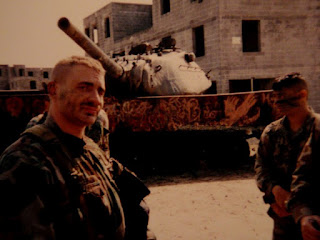 So, it was somewhere in Georgia or North Carolina on an Army land navigation coarse that I learned to maintain direction despite rocks and trees and unexploded ordnance. It came down to left hand turns. It is instinctual for a right-handed soldier to always veer right to avoid an obstacle, be it a tree or large hunk of metal with fins protruding ominously from the red mud and poison oak. Choosing a path around something and then immediately maintaining the course is how we get though our lives as well our enlistments. The problem is we rarely return fully. Every argument alters a marriage. Every heavy-weight punch to the temple makes you more likely to think a face tattoo is a good idea. Just as every right button hook around a Georgia pine puts you another degree or two off asthmus and away from the way point. And these way points, like truth or salvation or happiness or even just cash money, are very thin metal pickets placed in really thick parts of the forest. So, go right a few times the camouflaged instructors instructed...and then go the other way a few times around. It will most likely even out in the end. 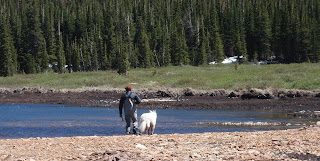 We met our friend on the fisherman's trail
We were headed to where he had been
He was coming from where we where headed
He had the stories and we had the dreams
Our faces where bright and his very nearly blue
Any luck up high? Brookies abound?
Nope...just iced up guides
Then with peppered chips, cheese and elk exchanged
Our forces bound and like when the major asked the last Mohican
There is a war on. How is it you are heading west?
We and our fishing friend faced north and, real sudden-like
Turned left.

Posted by Jay Zimmerman at 3:25 PM