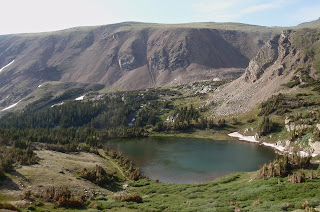 Joe Novosad, Erin Block and I met at the mouth of Moffat Tunnel at 6:30 in the morning with full rucks and good intentions. It was threatening to be another scorcher down below, so we planned to spend the day above 11,000 feet and maybe harass the cutthroat trout in Heart Lake. But the two hour walk up the side of the continental divide does not make for a guarantee of success, as it should. Heart Lake holds some big fish, some of the cutthroat up in the 18 to 20-inch range. But Heart don't give it up easy. The three of us (oh, and Banjo, too) gave it the old college try, the idiot's attempt, the optimist's whirl and even the fisherman's go. But nope. Just Chuck Testa. Shut down like a clown. Between the three of us we could fool only two fish all day long. Crushing. But there was always that smaller lake right on the other side of this misery and the now-'till-forever Heartbreak Ridge. Rodgers Pass Lake. A small lake that gets bypassed on the way up to glory and the promise of big trout. That lake has a bunch of tiny guys, people say. Heart Lake is where it's at! But we had no choice...if we were to salvage the day and our pride. If we were going to somehow justify the four hours of volunteer labor of carting a ruck and rod up and down a mountain...we we going to have to make it up in small fish. But quantity. What we found, however were hundreds of 12 to 15-inch cutthroat slashing at big midges on the surface of the water. The three of us stayed well past the hour we intended to ruck-up and leave. 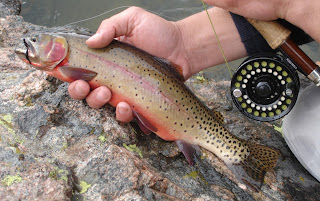 Posted by Jay Zimmerman at 7:09 PM