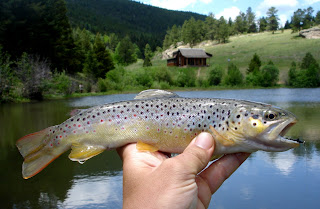 Brown does not exist. Thus Brown’s cabin can not exist. And the small, relatively untouched pond full of dry fly hungry trout? Nope. Brown’s cabin is a place you imagine and wish really existed. A public-access place that is near home, but just far enough off the beaten path that most have never seen it. A reliable place at the end of an un-named gravel road that you can take those that you love (who have come to visit) during runoff…when every other piece of local water is blown out with surplus snow melt or swarming with noisy weekenders. I had a day dream, while dutifully chained to my fly tying desk…that my mother and father came out to visit me here in . I would introduce them to my beautiful new girlfriend. And my big sister would be there, too. She would just happen to be passing through—on her way from to some other side of the world. The sun would be out and the wind would finally lay low. We would sit around the table and tell new stories and the old ones from the glory days. The other set of glory days—the ones that came before these ones. And then we would all string fly rods and find another gravel road, another adventure and maybe some trout. 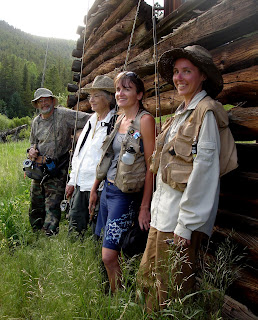 It has been years since I have gotten to fish with my dad. He was the one who taught me how to thread a worm on a hook and filet a bullhead only shortly after I learned how to walk. And it was his old fiberglass fly rod that cast this spell on me that has held it’s curse for so long. Never fading. Dictating, for better or worse, the outcome of my life. The rod was a 9 foot 7 weight J.C. Higgins if I remember right. God awful thing. But now—in my day dream—it is me who has the luxury of selecting a random $700 Sage from a pile of rod tubes in the corner and offering it to my dad. And a fully stocked “loner” fly box to use for the week…and take home like a good white towel from a ritzy hotel if he pleases. Oh, and the flies inside are of my own design. I am no doctor or philanthropist…but I know my dad is proud. What are you catchin’ them on, Dad?
Your flies, he says… 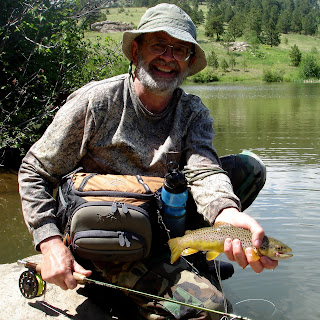 And mom, she could be sitting on the bank of the pond…correct posture and wearing a light-weight summer shirt and straw hat. A sight Monet spent a lifetime attempting to recreate. She would have a clean sketch pad and a collection of pencils. We all would fancy she was drawing us as we were casting, but in actuality she would be drawing in the landscape and maybe the cabin on the hill. We, just some of the trees. 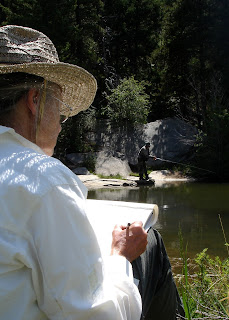 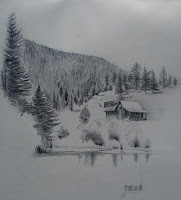 Blended into this family moment would be . Also on the water. Fly rod strung. Willingly throwing her lot in with mine. Gone and joined the circus. In my daydream she would be a stunning sight, making long, graceful casts out onto the still water of the pond…a very visible extension of her own beauty and grace. And she would land fish…and impress the alligator wrestlers and elephant handlers. Even my sister would comment.
She has a really good cast! 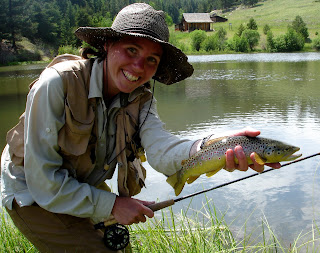 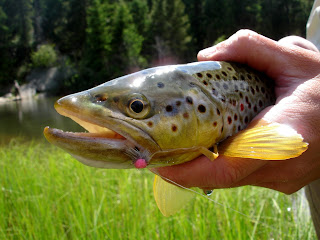 And the trout? There would be plenty of them. All eager to rise to a well-placed dry fly. But just as ready to baulk at the last second if things just did not quite seem kosher. The pond behind Brown’s Cabin would have only brown trout in it, of course. Wild ones, too. But…like I said in the very beginning, this place does not exist. I have you properly convinced of that, right? 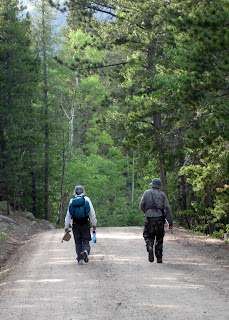