Asylum on the Williams Fork 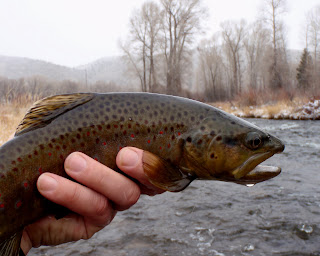 I already had the overwhelming desire to be off grid for awhile…to get on the road and out of cell reception. So, I leapt at the suggestion to join my friends Jeff and Cody on a slightly misguided jaunt down to the . The reports of good fishing in that area had grown a couple weeks old, and the snow and cold had arrived in the mountains with authority. But it was only a day trip and seemed much more practical and less knee-jerk than the ideas I had been brewing the day before over coffee…as I fiddled, idly with my passports.
The three of us met early in the morning at the same parking lot meeting spot we, as well as many other fishermen, have met at for years and years. We all looked a bit Salvation Army…wearing warm clothes dug from the backs of closets. It was summer a couple of days ago. Weird. We stood around, stomping our cold feet and getting our college football arguments out the 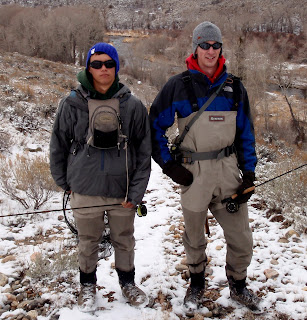 way (I miss Dan Hawkins already—Cody, a CSU Rams fan. would not even be a 500 team in any real division—Jeff, not a fan) before we all set aside our differences and piled on into my pickup, a cramped fit but we managed. And a few hours later we were at “state bridge” on the paying our parking fee and bravely climbing into our frozen waders which had been transported over the hill in the open bed of my truck. And the reception we got from the river and the trout was equally frigid. We did not give up quickly, as we probably should have. Several hours, and only a minimal few fish later we reconvened in the warmth of the vehicle to decide our next move. Our contingency. Our plan B. Because the current one was obviously a failure. Below ? The Williams Fork? All the way back to the Blue? But, the sun wasn’t getting any higher. Daylight savings time was ticking away fast. So we rolled the rigged dice…took an uneducated chance…and ended up at the Fork in the river. And, 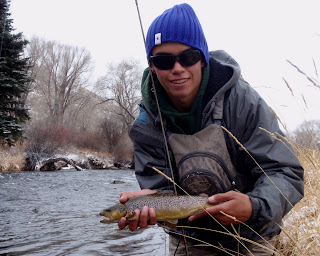 as a New York Yankees catcher once suggested, we took it! And the snow came down harder, but the tailwater was warm to the touch. And the brown trout were eating midges and tiny Baetis. There were a couple other fly fishermen down on the water, but we only saw them in passing. And we all waved. And the three of us caught some fish. And I felt good…no need to change my name and buy a one way plane ticket. Not just yet.
Posted by Jay Zimmerman at 2:43 PM