When the cat’s away, the mouse will play (or fish)


Written and Contributed by Tevis Blom (a.k.a Black Death)

Well, my girlfriend is out of town, which means my fishing addiction is in full blown form that could qualify for an intervention. Night bassing, impromptu road trips across the state in the wee hours of morning, fiendish tail-water sightfishing behind outlet malls and at the famous toilet bowl, wiper chasing in a pontoon, a lonely carp, and a few hours of sleep in the back of the car all were part of my obsessive ‘bachelor’s fishing weekend’. The next time you are granted a reprieve from your relational duties, I highly suggest you put together a fiendish fishing weekend of your own to satisfy that craving. After all, fishing really is an individual activity. Personally, I’m still coming down… 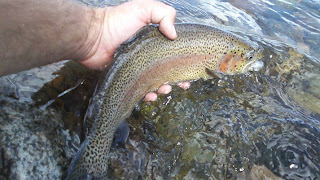 Friday afternoon was spent at the Blue in Silverthorne: Eager brooder fish stocked a few weeks ago took a variety of standard #18-22 tailwater midges and even ate a few hoppers on top to spice things up. I spent most of the afternoon breathing brake dust from the I-70 overpass, but being alone at one of the best holes on the river, I stayed put until near sundown. No monsters were sighted or caught, but a baker’s dozen were brought to hand with 9 being between 15-20”.

A Good Times double cheeseburger and five hours of sleep at a crowded campground were enough to get me on the road toward the famous Frying Pan river by 3am. By 5:30am I was rigged up at the ‘Toilet bowl’ and slaying some chunky fish on leeches and rainbow warriors. Not many Mysis takes… white snot nymphs= stinging lips. My favorite fish of the day was not landed, but I got to watch a ~20” rainbow eat a hopper off the top and got to fight with him for about a minute of head shaking… smart guy just wouldn’t run and get on my drag! The Toilet bowl is not the romantic fly fishing experience we wax poetic about. It is akin to a fisherman’s crack den. The fix is good, but eventually the drone of the generator and the beat up fish remind the angler that a more wholesome experience waits downstream. On the way out, fishing at the Bend hole provided more solitude and some traditional fly angling with midge emergers under a big dry. A few smaller and less beat up fish were eager enough for my midges and rounded out my day on the Pan. As predicted by NOAA weather, 40+ mph winds came in Saturday afternoon and I was on the road back to the front range. 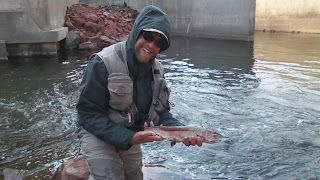 Sunday found me kicking around my pontoon on Union Reservoir for a change of pace. I made several futile attempts at following a few baitfish eating birds around in hopes of catching my first wiper. The wind would pick up and larger fish were busting prey up top, but being in the right place at the right time was crucial. Wind and waves blew me back toward the car, where I finally hooked up a crappie, and several smallmouth bass. Exhausted from the boat, I waded the south shore and hooked up a carp (I believe) which promptly broke off some old 3x tippet… All I saw was a flash of gold and scales. Never buy clearance tippet, especially Climax! No pics, only small fish landed that day. 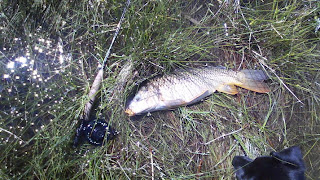 Memorial day I headed to my favorite quiet little bass and carp pond. Heavy winds made for challenging conditions and poor visibility, but a small carp and a perch were caught close to shore to add to my weekend species list. Being the fiend that I am, I continued fishing past the long weekend and headed out for some PM bassin’ on Tuesday after work. A few nice large-mouth came to hand around 10pm. After five days I had quite a nice fish list: Brown, Rainbow, Cutbow(?), Crappie, SMB, Carp, LMB, Perch… no wiper yet! I miss my girlfriend dearly, but life is all about taking advantage of opportunities. So if you can, go out and get your fiend on, in a good healthy fishy sort of way! 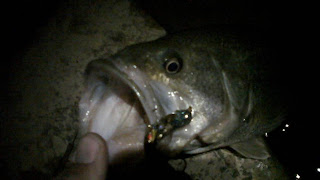 Posted by Jay Zimmerman at 3:12 PM