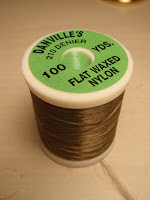 By. Christopher Helm
In the late 1930's, the Chenille Company created the "aught"( 3/0,6/0, 8/0, etc.) system to indicate the size of thread. This was based on a system where the number or "aught" was the base point and as the thread became smaller additional zeros were added indicating that the thread was finer. As an example, a thread with six zeros ( 000000) translated to a 6/0 thread. As other thread distributors were born after the early 1960's, they followed the same system which was assigning a standard that does not provide as accurate a measurement for the fly tier as denier. In 1988, Tom Schmucker of WAPSI Fly, Inc. in Mountain Home, Arkansas introduced a nylon thread simply called 70 UTC and 140 UTC based on denier, which is the method of measuring thread. This is the system that the garment industry uses for thread to sew clothing. Denier is defined as the weight in grams of 9000 meters of nylon, polyester, rayon thread, etc. There is a correlation between denier and breaking strength of nylon and polyester thread, the smaller the denier number the lower pound/ounce breaking strength of the thread. At the present time, about the smallest denier nylon or polyester for fly tying thread is 40, which would be used for tying midges. The one exception to this denier vs. breaking strength rule is that gel spun polyethylene thread is two to three times stronger that nylon or polyester of the same denier. This transition to a denier rating system will take several years to be completed. Danville and Gudebrod are committed to making changes as they order new labels. UNI-Products has already begun the transition.
Posted by Jay Zimmerman at 6:29 AM