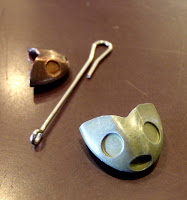 As a fly tier and serious streamer fisherman I was very interested in the weighted Fish Skulls that hit the scene a couple years ago. I received my sample pack at the fly shop and tied two big baitfish streamers and crammed the weighted scull onto the front. They both looked great. I really liked the fact that I could wrap some schlappen or rabbit strip tight behind the hook eye and then mount the head from the front, pushing all the material back once the fly was finished. But there was only so much room for innovation. Besides, I have been really into articulated streamers weighted so they ride hook point up…and just couldn’t do that easily with the original Fish Sculls. Now the company has pushed the envelope a bit more with the Sculpin Helmets. These are about the same design, only they lay flat—like the head of a sculpin (think flat head catfish.) Plus they are making an Articulated Shank you can use to easily create a long, jointed streamer. Now, this I am into! When I received this sample pack at the fly shop I quickly cranked out two more with the material provided. I used a #10 TMC 8089 hook because they are big, but light weight—thus easier to counterbalance with weight to force point up. The rest of the fly I made as simply as possible; dubbing underbody, rabbit strips over the back and a couple rubber legs. My analysis? The fly tying world is full of gadgets that come and go…but, these are pretty cool. 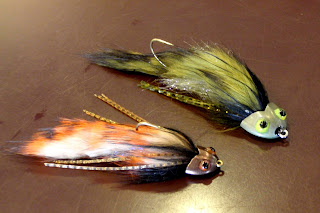 Posted by Jay Zimmerman at 6:32 AM