The Conception of the Geezus Lizard

The creation of the Geezus Lizard hinged entirely on the conception of the ferruled dubbing loop tail. I have tried for years to build a worm-like fly, or fly appendage, to mimic the rubber worms conventional bass anglers have in their arsenal. The long, narrow look of a worm undulating and jerking near the bottom of a pond or lake is well known for triggering big bass strikes…conventional bass fishermen have know this for decades, one of the reasons long, soft plastics are one of the most frequently used lures. I tried chenille, rabbit strips and a whole assortment of other tying materials…but the end result always looked like a bag of chopped assholes leaked onto my tying desk.
Once I grasped the concept of ferruling a long dubbing loop, it all fell into place. I used durable thread and dubbing wax and some real nice, long fibered dubbing that I could rake ou 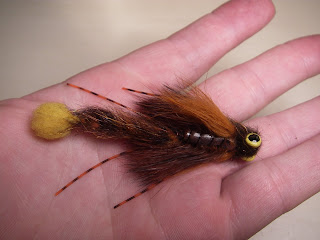 t. Then I sexed it up a bit by using two separate colors on either end of the dubbing loop, giving the worm a segmented look. The yellow tip on the tail was a nod to all the old “Mister Twister” tails on the jigs and soft baits I fished to smallmouth bass as a kid in Ohio .
The rest of the Geezus Lizard is modeled after bass flies I have tied and fished all my life. Simple, “pig-n-jig” type stuff using crosscut rabbit strips and rubber legs. The only slight modifications were the true jig style hook and the wire ribbed scud back on the underneath of the fly. This does two things, it makes the fly look a lot cooler…and, on the practical side, it allows the fly to zip right back down to the mud after it has been jerked by the angler. This gives the Geezus Lizard a very unique action it the water, very closely matching the way a spooked crayfish darts out, then immediately tucks back to the bottom. This action has the same effect on bass as a two inch, wounded bluegill listing to one side and darting about erratically! The bass just have to pounce!
I have fished the Geezus Lizard primarily for largemouth bass, but it has been a devastating fly for smallmouth bass, large trout, northern pike and some friends have even used it for reds off the coast of Texas ! It can be fished deep and slow, or fast and shallow…in rivers or stillwater!
Posted by Jay Zimmerman at 6:59 AM