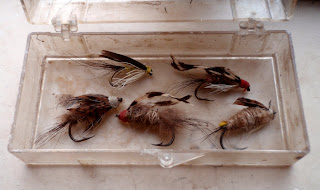 Mementoes. Keepsakes. Call them what you want. Call them all just a bunch of old crap. But they are artifacts from past lives. We don’t think about them until we stumble onto them…unexpectedly. Then the old stories swarm out of the subconscious like ground hornets from under a lawn mower. They come out of nowhere…a spectacle, snapping the unsuspecting operator out of a droning monotony. And sometimes they sting your ass. I had an entire armload of my past lives dropped into my lap recently. My sister was in town for a visit and had left me some old things she had dug up at our parents’ house. I have not been back that way in years…so was more than mildly interested to see what sort of childhood relics my sis had unearthed. Some old journals, fly boxes and photo albums. Very cool. Being a complete geek about flies, I had to dig into some of the boxes. They could have been some of Dads’ old lures…maybe one of my early fly boxes abandoned at home when I left for the Army. What I found (tucked into an ancient hard plastic Heddon box) was not what I had prepared for…not just an old box of moth-eaten Muddler Minnows. Inside were the very first flies I had ever tied. For real. The very first. Rusty bait holder hooks rescued from the bottom drawer of my dads’ tackle box when I was about 12 years old. I remember attempting to secure the hooks into the arm of a piece of living room furniture. Lashing chunks of raccoon fur to the hook shanks…having not a clue about dubbing or dubbing loops. And doing my best to tie on wings using some turkey feathers Dad had laying around. I am sure I took my creations down for my mother to see. She probably raved and over-complemented them…and asked me to set the table.

Then I opened one of the photo albums and came face-to-face with another of my past lives. Gone were the fond, bare-foot memories of my childhood…plate of freshly made sandwiches and orange juice for lunch…making adventure plans for the endless afternoon. Take off your good shoes if you are going to play near the pond again! Pow. Fast forward straight into the Army. Condensed spaghetti MRE’s for bre 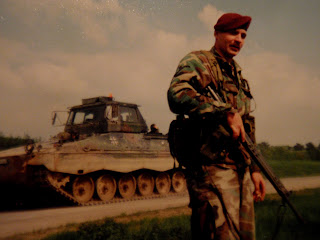 akfast. Miserable sleepless nights. Living out of a rucksack as though it were an 80 pound studio apartment you are forced to carry on your back. Those memories. The ground hornets that will sting your ass.