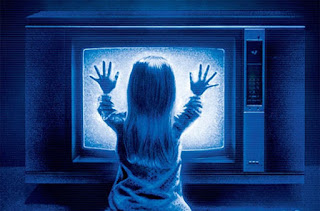 Not long ago I was asked if I believed someone could be possessed by a demon. I shrugged and wondered where exactly the conversation was going and if there was enough wine left for me to get drunk or if I was going to have to move along. There was enough wine so I stayed for the story that followed the question. A spooky, first-hand account of a young man suddenly jumping to his feet and yelling during a Sunday school lesson. I guess the lesson was being conducted in an old, remodeled trailer and the room had gotten suddenly chilled before the outbreak...all poltergeist like...and the man's voice was deep and sinister and not his. It was a chilling story and I think I said something dumb to ruin a perfectly great ghost story, like most atheists do...did he have tourette's or something?

I then promptly forgot about the story. As most drunks do...

I forgot because I had to move on. I had a promise to keep. To take a friend out to catch her first carp on a fly rod. We had made vague plans earlier in the summer but, because her and her husband were busy running a well-known meadery in town, we just danced around the idea for so long that summer turned into November before we locked down a date. Friday morning. The day before a whopper snow storm was scheduled to slam into Colorado, so it was then or never...or, at least next spring, that may as well be forever away. But I had already hung up my carp gear for the year, at the end of October before the last bout of cold weather hit us. And I waited a bit too late the night before to go down into the basement to resurrect my carp rod and find my box of carp flies. I couldn't find it and I was tired and impatient and in a hurry and got tangled up in a pile of loosely-tied bags for recycling and next thing I know I'm curled up in the fetal position with my right leg sticking out at an odd angle. 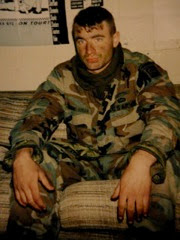 My right knee has haunted my entire adult life. As I squirmed around on the cold, concrete basement floor trying my best not to pass out/scream like a dying rabbit/chew my own leg off...I had one of those movie montage flashbacks. My last year in an Army airborne unit, when I successfully convinced everyone around me that I was healthy, when I had only one knee. The right one had no ACL or meniscus left. I stayed drunk as much as I could and when I couldn't be drunk I would act so crazy no one noticed when I sprawled out under a log obstacle or on a darkened drop zone writhing around and making horrifying animal noises. It was just "Zee" and that fucker's crazy! Neither I nor the Army new any better and they let me back out to try to make a go of it in the civilian world as...basically a one-legged, violent drunk. My temper wrecked any relationships I made. My drinking destroyed my pickup truck and an innocent ash tree. And my intolerance for idiocy caused all of my G.I. Bill to get wasted on classes that meant nothing to employers. I did manage to survive, make enough money to eat, ending up in strange places with odd jobs. A carpentry gig for a log home company... hoisting 20-foot logs, hoping my legs would hold. Sometimes they wouldn't. Kodiak Island on a fishing boat, where I would have to tie myself to the gutting table to keep from being thrown from the fish-slimed deck into the Gulf of Alaska and a sure death.  And remote villages along the Yukon with one-armed native postmasters and dark-eyed meat thieves... guiding moose hunters. 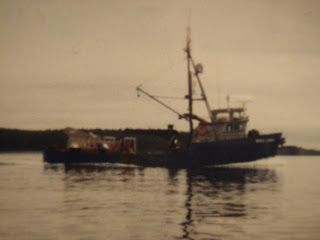 Standing beside the Kateel—
rod in hand, wool hat on head
and chilled through to the core.
Crunchy tundra underfoot.
Snow dressed domes of beaver huts.
Frozen chunks of river foam.
The meat pole is standing bare.
The canned beans have long been had.
And the grayling won’t bite anymore.
Stuck alone with a wall tent
somewhere north of Galena—
closer to Russia than home.

It was at the end of the last moose hunt that my right knee finally ended my run. The freeze had come earlier than expected and we had to pack up camp into a couple boats and journey down a remote Alaskan river in search of a straight enough and deep enough piece of river to safely call in a float plane. In a day or two we did, but when hauling the boats up into the tree line above the high water line, to chain them to trees for the season, with the sound of our ride out getting louder and louder...my knee gave out. That demon reared its horrid head and shook me until I swore my leg had been torn completely off. As the float plane could only handle half our gear, the pilot and one passenger, I was forced to be on the first flight out, limping into the swift, frigid river with nothing but a two-piece fly rod tube for support. I was drenched, hypothermic and in total agony. But the pilot still had to taxi down river a ways, turn around and blast off back up the straight-away. It was when he tried to turn around that the floats got caught on a shallow gravel bar. He did his best to erratically gun the engine, rocking us back and forth to free us. But to no avail. The pilot turned to me and did his best to clearly explain what the situation was. It was simple; I get out of the airplane, unload gear on my own until we were light enough to rev off the sand bar…and then reload all the gear. Accomplishing this by crawling from the float plane to shore with loads of gear because I could not walk. Or I could real quick learn how to drive a float plane. He was serious. He was prepared to teach me to operate his cab. Right then and there. I considered it, but seeing as I had larger balls than a brain and that the effects of hypothermia had already begun to effect my hearing and other acute functions (and, the last time I drove I wrapped the vehicle around an ash tree) I elected to face the ice-cold river on my wounded knee. My memory of the event becomes blotched at best from this point forward. I remember being dropped off at a dock somewhere and low crawling down a dusty gravel road. And I remember attempting to bathe myself in a sink before catching a ride in the bed of a truck to the village tarmac. And being hit on by a native girl at the Anchorage airport. She was tending bar, but apparently was willing to do anything for a box of moose meat. I had no moose meat and doubt I could even understand English or Athabaskan at that point.

I, again, did learn to survive. With help. The VA hospital in Cleveland spent seven hours on my knee and sent me back out into the world with crutches and a bottle of pills. But they had exorcised at least the one demon.

That was nearly a decade ago.

I remembered all of these things lying on the cold basement floor…once again not able to stand. And it terrified me. But I had a promise to keep. A girl and a carp. And some lost box of flies somewhere on some shelf to find. Because, through agonizing trials comes perseverance. And endless tribulations comes stubbornness. And the best way to deal with promises is to keep them. And the best way to deal with demons is to, well…deal with them. 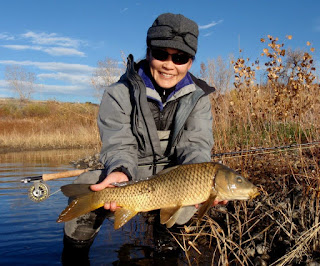 Madoka Myers with her first carp on the fly!
(Helped only slightly by her gimpy guide on crutches.)

Posted by Jay Zimmerman at 7:00 AM