Double Digits, Mirrors and Other Milestones 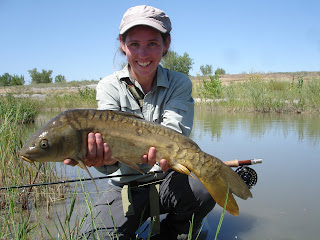 Every life has milestones; eighteenth birthdays, first black eyes and retirement parties. Some just come along with age and these are more a tribute to your ability to stay alive or gainfully employed, but they can be equal when held up to the other achievements in life that are actively sought after. Other milestones are really more rites of passage, maybe inevitable pitfalls that come only if you are doing the right things for long enough...even if it means taking a nightstick to the face from time to time. In fly fishing things are more straightforward and usually less muddled by arguably misguided acts of civil disobedience. Many of the achievements in the sport are those that are a result of any number of things; skill, patients, persistence or just dumb luck. But time alone means not much. No one is impressed by the man who claims to have been fly fishing for forty years...yet can not cast well, tie a knot or tell the difference between a caddis and a crane fly. The first brookie caught on a big, bushy dry fly that was tied by your own hands...is cause for high fives at your local fly shop, even if you are not thirteen. There are a lot of these milestones in trout fishing. Landing a 20-inch trout on a #20 dry fly. A grand slam (taking a brown, brookie, cutt and rainbow all in the same day!) And, of course, taking a trout on a fly you tied yourself. These waypoints are well known and commonly recognized by trout fishermen around the world...as well as other, more regionally excepted achievements in fly fishing.
﻿ 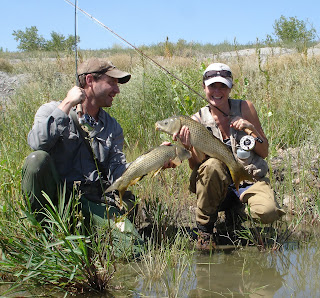 In carp fishing things are a bit different. Taking carp on the fly is not necessarily a new thing, but certainly newly excepted as an integral part of mainstream fly fishing, on equal footing as steelhead and redfish. But, because it has only recently become common practice amongst a larger portion of fly anglers across the country, it has been fun to witness and be a part of the rapid evolution of the sport...and watch the Carp Culture begin to emerge. With any new culture comes new language...often borrowed bits and pieces from similar tribes. The language of saltwater flats fishermen have made its way into the conversation (which makes sense as they have such similar styles). But there is some other very colorful terminology in carp fishing that is new and very unique. "Counting leans" is a phrase we use, usually in the spring when the water is still cold and no fish are hooked, but a couple carp turned on the fly ever-so-slightly by god! So, when asked how the mudflats were that day we say we got a couple hard leans! Another favorite is getting "bass blocked". This happens when you have spotted an actively feeding carp, made just the right cast, but before the carp can intercept your fly a young largemouth zips in and steals the show. Now every serious carper is also an unapologetic bass fisherman, as well...and would, under any other circumstances, celebrate the catching of a bass regardless of size. But not in lew of a sure shot at a carp. Dammit! Got bass blocked! Then, of course, with the budding culture comes the creating of the milestones, the way points along the far bank that one strives toward. There is the landing of your first catfish on the fly, your first koi, your first mirror carp (a genetic mutation in a common carp that leaves the fish with a bazaar scale pattern), your first grass carp, your first double digit day on the mud flats and hands down my personal favorite, the carp slam...which is a bit different than a "grand slam" in saltwater. A carp slam is is achieved when you take a carp in three different bodies of water in one day. Fun...only if self punishment isn't masochistic enough.