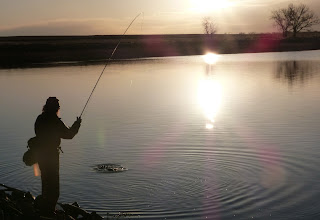 When I was a kid "opening day" was as exciting as any good holiday with all the same build up and anticipation ..and staying up late the night before. That ended with the usually and similar over-expectations and let downs. Opening day meant the first day of trout season in western Pennsylvania when I was a kid. Happened about this time of year, too...mid April. The nights and waters were still cold, I remember. And the opening day usually found me and friends standing on the banks of a creek, nursing under-aged hangovers (Busch Lite bought by a friends older brother) and gazing hopefully and dumbfounded out over a a body of trout stream brown and bursting at the seams from run off. Rarely was a fish seen at all. 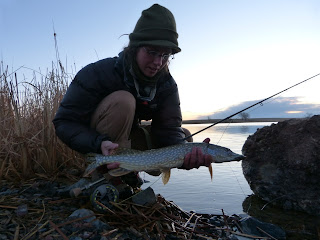 The idea of an opening day or even the concept of a trout season is so foreign to any fly fishers who have never lived outside Colorado or elsewhere here in the Rocky Mountain West. It seems even a bit silly. And it was... especially because it usually was stocked trout we were looking for. Checking stocking reports, listening to the Weather Channel  eavesdropping on bait-store gossip... Yes, it all was a bit silly now compared to the 365-day binge we enjoy out here. And wild trout. But there is still something that gets me pumped up about being told you can't fish...and then, NOW you can! Go! Like a dog obediently drooling and staring cross-eyed at the Milkbone balanced on his nose. Or the first time that cute girl doesn't back away when you lean in for a kiss. The build up makes the reward so memorable. 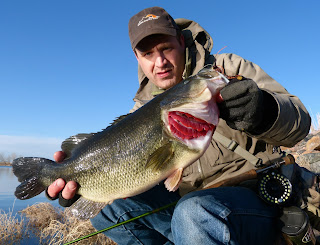 These memories of the PA trout openers of my youth are the reason I still wake up early and drive down to Denver and fish the Rocky Mountan Arsenal on opening weekend. There are other, less crowded pike spots and a hundred other great (and better) bass lakes on the Front Range, but that ain't the point. The gate opens at 6 o'clock and everything is prepped ahead of time...flies are tied, rods are strung and resting in the bed of the pickup truck. Radio belching some old Chris Ledoux. Lets drive up get out and get on another one and boy you better win...Warm gloves. Hot coffee. Spare wire leaders. Here we go!
Posted by Jay Zimmerman at 3:12 PM